While this market is still trending up, I have a few compelling longs I am looking atheading into the Spring and Summer of 2014.   Here they are:

$ADBE Pirce target was raised today to $85 by Jefferies

Adobe price target raised to $80 from $65 at Jefferies
Jefferies raised its price target for Adobe shares to $80 after its recent survey indicated the company's Creative Cloud continues to attract users who had previously not used Adobe products.  The firm thinks Creative Cloud subscribers could reach 8M by the end of FY17 and keeps a Buy rating on the stock

Chart looks compelling as well. Stock has consolidated recently after making new highs.  It looks poised to take out the $70 level shortly then $75. 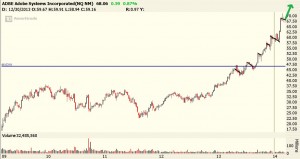 $EBAY , after over a year of consolidation, is at the start of an impressive price breakout.  The stock should trade well over $60 in the coming weeks and I look for the $75 level come summer. 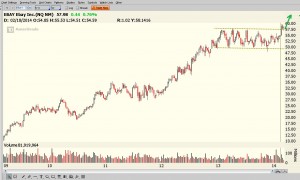 $Z looks poised to break back into the triple digits over the next few months.  The stock has been consolidating recently and contained while at the cusp of breaking the upper trendline.  When that trendline is broken a swift rally over $100 will ensue. 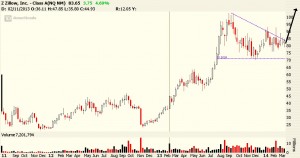