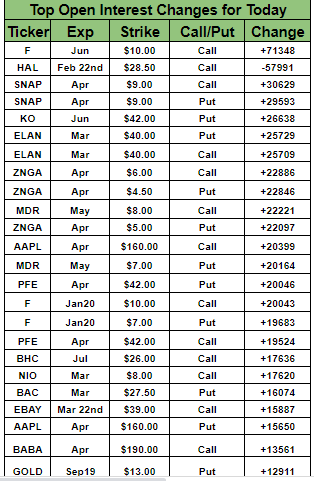 The Dow Jones Industrial Average is likely to break through the 26,000 level today as futures point to a 36-point advance, marking the next comeback for the stock market since the beginning of 2019. The latest boost comes amid the most significant progress yet toward ending the seven-month U.S.-China trade war, with negotiators drawing up six memorandums of understanding on structural issues: forced technology transfer and cyber theft, intellectual property rights, services, currency, agriculture and non-tariff barriers to trade.

Stocks edged higher in the previous session after minutes from the Fed's last meeting reaffirmed that the U.S. central bank would be "patient" with respect to further interest rate hikes. Most FOMC officials also indicated they were ready to stop shrinking the central bank's $4.1T asset portfolio this year and believed an action plan should be released soon.

Next up is minutes from the ECB's January policy meeting at which President Mario Draghi stressed downside risks to the region’s economy from a host of factors. Investors are additionally watching if the bank will push ahead with a new round of TLTROs. Chief Economist Peter Praet said the ECB will soon discuss the plans, but hinted any new round of credit may not be as generous as the latest TLTRO facility (which was offered at zero percent interest).

German manufacturing activity dropped to its lowest level since 2012 in February, with IHS Markit's PMI slipping to a record low of 47.6%, leaving the country's resilient services sector to keep the economy afloat. "The uncertainty relating to U.S.-China trade tensions and weakness in the autos industry - were highlighted, although there were also reports of growing competitive pressures within Europe," said Phil Smith, economist at IHS Markit.

With taxpayers rushing to beat a deadline to settle self-assessed liabilities, Britain last month posted a record budget surplus of £14.9B, providing a welcome boost in the wake of a threatened credit-rating downgrade over Brexit. Theresa May's Conservatives suffered a split of their own on Wednesday, with three anti-Brexit MPs from the party becoming the latest recruits of the new Independent Group.

Lyft is planning the roadshow for its initial public offering for the week of March 18, according to Reuters, making it the first U.S. ride-hailing company to debut in the stock market. Planning on listing its shares on the Nasdaq, LYFT expects to be valued at between $20B-$25B. Larger rival UBER still needs several more weeks for its roadshow preparations, but its IPO is likely to come shortly after.

At a launch event in San Francisco, Samsung (OTC:SSNLF) unveiled the first consumer-ready foldable smartphone, calling it the Galaxy Fold. The 5G device can work like a traditional 4.6-inch smartphone or morph into a mini-tablet at 7.3 inches. It's still far from clear whether consumers will embrace a phone that retails for $1,980, or that it will provide a new creative catalyst which the market needs.

Several companies, including Nestle (OTCPK:NSRGY), McDonald's (NYSE:MCD) and Disney (NYSE:DIS), have pulled digital advertising spending from YouTube (GOOG, GOOGL) over growing concerns that the site has been facilitating paedophile networks. Users were said to be connecting with each other in the comments section of videos of young children, and sometimes even sharing links to hardcore child pornography. The escalation echoes a similar backlash in 2017, when advertisers pulled their commercials over fears they might be placed next to extremist or inappropriate content.

Johnson & Johnson has received subpoenas from federal agencies for the first time related to litigation involving alleged asbestos contamination in its signature Baby Powder product line. The company intends to "cooperate fully with these inquiries" from the DOJ and SEC, and will "continue to defend J&J (NYSE:JNJ) in the talc-related litigation." JNJ -2.1% premarket.

Newly unsealed court testimony has revealed some details surrounding a healthcare joint venture launched by Amazon (NASDAQ:AMZN), Berkshire Hathaway (BRK.A, BRK.B) and JPMorgan (NYSE:JPM). "One goal is to bolster the importance of primary care... and understand where there's variation in care, quality, where prices don’t match value, where doctors are performing," COO Jack Stoddard said. The business is also looking at pharmacy costs.

The biggest threat to Volkswagen's (OTCPK:VWAGY) 2019 profit is potential American tariffs. "It's becoming tense once again," he told the FT. "You know it's a pity because we can’t solve it from the car industry [alone]. It's more of a tariffs negotiation between Europe and the United States." Analysts at London-based Evercore ISI said tariffs could cost VW €2.5B a year, about 13% of expected earnings.

NASA has warned SpaceX (SPACE) and Boeing (NYSE:BA) of design and safety concerns for their competing astronaut launch systems that aim to return astronauts to the International Space Station for the first time since the Space Shuttle program ended in 2011. The clock is ticking. The U.S. has been paying Russia about $80M per ticket for rides on its Soyuz space vehicles, but there are no seats available for American crew after 2019.

Barclays traded at the top of the London market overnight after saying it would increase investor returns this year amid increasing pressure from activists to boost its bottom line. Full-year earnings were weaker-than-expected, however, and Britain's second-largest bank set aside a Brexit provision of £150M in its 2018 results. "In the course of the year... the strategy we have implemented began to deliver," declared CEO Jes Staley. BCS+3% premarket.

Potentially drawing a line under probes which have dogged the bank for years, Standard Chartered (OTC:SCBFY) has set aside $900M to cover fines resulting from regulatory investigations in the U.S and Britain. The news comes ahead of a strategy update from the lender, as well as its 2018 earnings results on Tuesday - when StanChart CEO Bill Winters is widely expected to outline an overhaul of operations.

Deutsche Bank lost $1.6B over a decade on a bond trade that involved insurance from Warren Buffett's Berkshire Hathaway (BRK.A, BRK.B), WSJreports. The complex municipal investment was made just before the 2008 financial crisis, and the embattled German lender resisted for years to reduce the value of bonds and related derivatives. "This transaction was unwound in 2016 as part of the closure of our Non-Core Operations" unit," according to a Deutsche (NYSE:DB) spokesperson.