Last time we wrote about a bottom(In march),  folks focused more on the descriptive photos then the actual content and missed out on another 20% upside move from Priceline.com (PCLN). I guess we have Coco Austin and Nikki Minaj to thank for the clueless traders these days. When one thinks with the wrong brain, they are sure to make mistakes. 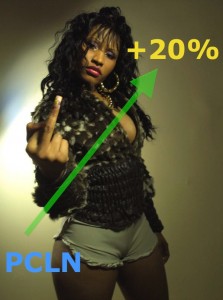 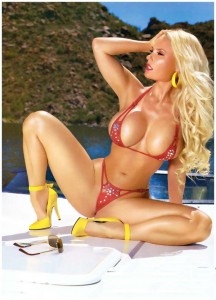 Might as well try and see if the trick works twice. The market is off it's 4 year highs from April, and the "Sell in May" mantra is starting to look like smart advice. Greece chaos? Spain 10 year yields through the roof? China growth slowing? U.S. unemployment numbers still a huge concern? Haven't we seen this before? Thats right, the time we pulled the carpet out from under the bulls, only to ramp the market up 35%+ from it's october lows.

This time it's different. All those events are somewhat factored in. If Greece defaults, it will not shock the system. Smart money is pretty much saying it's going to happen. Is the China slow down going to bring Australia and the other strong commodity economies to a screeching halt? Any smart trader knows China could only grow it's GDP so long on fake growth.

The only real factor that traders need to worry about, is the election. The market could remain somewhat skittish as the outcome is still far from clear. But how can you bet against the incumbent. His recent approval of gay marriage, only increased the odds of more intervention from the Fed via QE3. Folks dont care so much about that right now, they care about the economy.

So where are the markets headed this week? Only time will tell, but I think the JP Morgan fiasco last week signaled a short term bottom. Why? Well the market is all about confidence. I remember back to the flash crash of 2010, when i wondered how people could still trust the market. I figured the uncertainty would drive stocks down, when the markets actually rallied. Maybe they were oversold? What I do think is the crash signaled a bottom for traders and they took advantage of it. Just like we have now.

One of the short term signals is the US Dollar. Its been quite sometime since i have seen it rally like it has over the past 2 weeks. 10 consecutive green closes! I sure as heck don't feel any more rich... 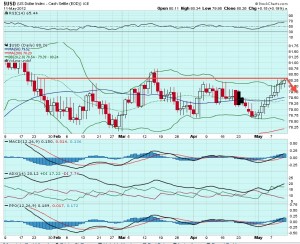 So I figure a mixed day on monday, followed by a 1-2%+ move on Tues and/or Wednesday. Will put up another update by then: 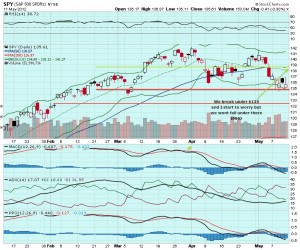 And like we always say, nothing beats a nice bottom...