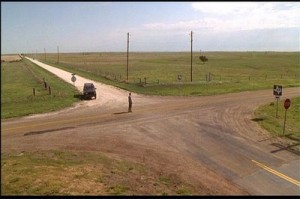 On April 4th, the market hit a 4 year high as the $SPY touched $142.21. If you had told someone last October that the market would be up nearly 40% 6 months later, they would call you crazy. But that is exactly what happened from the 107.43 low on October 4th. Amongst all the negative sentiment, the market mysteriously found a bottom and rallied furiously, squeezing all the bears... the ones who watched the riots in Greece with glee, the ones who were hoping for someone else's pain to give them glory. We have seen this story over and over. The Eurozone debt situation is not a new problem. The market has been dealing with it for 3 years. We have seen this before, and it will not be the cause for a larger sell off in equities. May's decline has been somewhat orderly. The trading days have lacked the 1-2% swings we became accustomed to in August and October. This is no panic sell-off, its profit taking.  Yes, the USD has been on a major tear, trading up for 14 straight days at one point... the most since 1985! 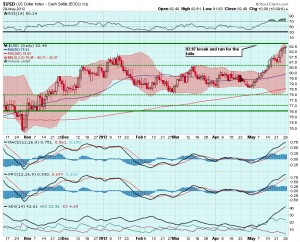 Looking at that data point alone, I woud assume the markets had a massive sell-off. Yet we are not even in 'correction' territory. It's buy the dip time for me. With the election coming, there is no way the market is allowed to fall any further. Well we shouldn't call it a market, since the Obama administration will pull out all the stops to ensure the "economy" is not the cause for Romney winning. And to make that happen, we will need to have a nice summer rally.

Best way to make money trading, is to be ahead of the curve. Here is what I am doing to ensure I am:

Buy out of the money calls on those plays to maximize the impending short squeeze. The dumb sheep are the ones who are shorting it based on the chart, and will be covering when they start getting squeezed.

Second, expect some sort of China stimulus. They are missing the talks of their growing economy and want to be back in the spotlight. China can be the key for a nice recovery alone, and China sure knows how to manufacture fake growth to inspire folks to load up on China stocks like Sina.com(SINA) and Baidu(BIDU) as well as the oversold commodity stocks.

We will have more on our watchlist tomorrow, but we are banking on a nice rally coming in the next few weeks. By the time you blink, we will be back over the April highs. Most folks will be scratching their eyes wondering what happened. Here at OptionMillionaires we will be counting our profits.

Take a look at the chart below. Lets have a great week!!! 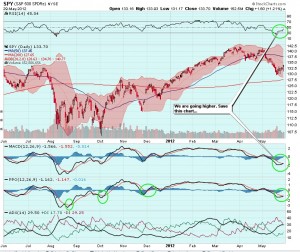 I have been following Par Pharmaceuticals (PRX) for 4+ years now, and have watched it move from $8.57 in 2008 to $42.80 last week. I quite honestly think the stock is just starting to get traction. I wrote about Par Pharmaceuticals (PRX) on April 24th, when the stock was trading at $40.94, and gave quite a few reasons for my bullish sentiment. Earnings are out pre-market tomorrow. Here is what we were buying today:

The market is never going to go straight up, although it felt that way from the start of 2012 until late march. Folks are continuing to look for catalysts to get some type of correction.

Earnings plays can be very rewarding for those who are on the right side of the trade via options. Apple (AAPL) and Amazon (AMZN) catapulted 10%+ on their earnings report the last two weeks, while Green Mountain Coffee Roasters (GMCR) fell 50% on theirs. Which will be the one to bring option players the 1000%+ gain in the coming week? Here are a few we have on radar for next week, and my thoughts.