I was just running through this weeks earning reports,  wow,  its a giant one.  I can't recall so many big names reporting in one week. This will require breaking my earnings posts into segments.

Let's start with the reporters for Monday and Tuesday.  I only list stocks that I think have a good chance of moving post earnings. END_OF_DOCUMENT_TOKEN_TO_BE_REPLACED 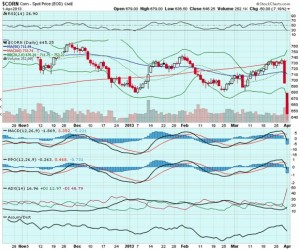 Two big up days, one big down day past three sessions. Everyone and his brother, sister, mother, father, friends, and anyone else with a mouse/pen/blog are calling for some type of pullback soon. Some say its the huge insider selling recently... well duh stocks are at 5 year highs.( http://www.marketwatch.com/story/insiders-now-aggressively-bearish-2013-02-06?dist=beforebell ) Some say its the triple top coming from 2007 and 2000 highs. Other say its overall bullish sentiment of the market. Talks of Europe are starting to get back into the headlines with Spain corruption issues and more problems in Italy. 10yr bond yields have spike the last few sessions and folks are thinking we may have the same pullback we had in 2011/2012 in March. Gosh, sounds to me like its time to go puts... wouldn’t it. But once again, its the same old tune, and we saw how it worked out everytime since march of 2009.

This market will not go down until all the sheep are on the corral, with the gate shut, and all the herders out of the corral counting their loot. The VIX crossed the upper bollie on monday, and as I spoke about on the last week ahead webinar, the market reversed.

Futures have slipped this morning, and we shall see if we are in for another 3 digit move in the DOW. Its possible, but I think the trend will still be higher.

Nice earnings by EXPE yesterday, but it’s not moving the stock as much as I would like. I still think it will see over 70 today, and like PCLN to get over $710. DDD announced a 3 for 2 stock split which should help squeeze some shorts. We grabbed the 70 Feb 16th calls yesterday and may look to add some higher strikes.

CMG is getting positive comments from analysts but is down a few dollars pre-market.

Here are some of the analyst changes this morning:

Chipotle price target raised to $334 from $318 at Piper Jaffray

McGraw-Hill upgraded to Strong Buy from Outperform at Raymond James

After Expedia reported stronger than expected Q4 results, Cantor believes that room night growth acceleration should help the company achieve healthy double digit revenue growth in the near and medium term. The firm raised its price target on the stock to $77 from $70 and reiterates a Buy rating.

Expedia downgraded to Sector Perform from Outperform at RBC Capital

Expedia price target raised to $80 from $67 at Benchmark Co.

Expedia price target raised to $80 from $70 at Deutsche Bank

Here is what I am looking at for the open:

Stay tuned to chat and twitter for any updates to my trades. Lets have a great day!

Another great trading day yesterday as SAM continued to move, GS exploded higher, SODA tested 45, BBBY continued its move, MON broke 92.50, and seemed everything on the call side was up nicely. SINA had a consolidation day and I still like her for 52-53 this week. Also had CMG on the watchlist yesterday and we grabbed the 305s @ .50. The move the last few days has shocked even myself, as we are now a stones throw away from testing the 52 week highs, and getting closer to 150 on the SPY, like I have been talking about for months. Futures are green again this morning with some data out. Japan continued its recent market surge and the Nikkei closed over 10,000 for the first time since March. Couple that with the Shanghai index move over the past few weeks, and you have quite a rally over in Asia. Lets not get over confident about a huge rally coming over the next few trading days to close out 2013, but i also wouldn't rule it out. Seems the ones to watch right now are the oversold, shorted stocks that still have decent fundamentals. One of the reasons I like CMG, SODA, SAM, FSLR, and SINA.

Here are some of the Analysts ratings and remarks today:

As previously reported, Wedbush upgraded Panera Bread to Outperform from Neutral. The firm upgraded shares based on checks that indicate Q4 same-store-sales are tracking at the high end of 5%-6% guidance, comps sustainability, and low commodity impact. Price target raised to $190 from $160.

Piper Jaffray believes Apple will launch a television in time for the 2013 holiday season and calls the stock a top pick for 2013. Piper believes investors that sold Apple shares to avoid a potential tax increase could return to the stock given the valuation. The firm keeps an Overweight rating on the name with a $900 price target.

Citigroup said its channel checks indicate Starbucks' new single-serve cappuccino machine Verismo is being well received by consumers. Citi believes the company's Q4-to-date U.S. same-store-sales are likely trending up 6%-8% compared to up 7% in Q3. Citigroup remains positive on shares of Starbucks with a Buy rating and $63 price target.

Currently hold CMG calls so on the fence around adding PNRA calls, although i think that stock should be $180+ right now. May look at calls at open. MLNX CEO on bloomberg yesterday and article out from Barclays defending the stock and keeping 140 PT, so like that one. Have had it on watch for days so this is the time I get in. Will also grab some BBBY calls at some point today for earnings.

Strikes on watch this morning

Lets have another great day!!

First off, the site is moving quickers as we upgraded our server, but we did have some temporary issues so apologize in advance for any troubles accessing the site. Now on to the fun:

What a great start to the week as a few of the plays on watch from last week continued to ramp higher, and others started their advance. SAM continues to move, marking its 3rd consecutive day of gains closing right near the high of day on huge volume. SODA finally broke the $43 resistance on amazing volume as well with NO NEWS. Seems to be more optimism on this fiscal cliff fiasco getting resolved so futures are solid green. If you were in the chatroom or on the week ahead class you heard quite a bit about japan and the oncoming currency wars coming in 2013. The clowns on tv are still talking about QE, and I think that term will be replaced by another coined phrase in regards to currency. We shall see.

Going forward I will try to include meaningful upgrades and downgrades, most from fly on the wall.

Goldman Sachs upgraded to Positive from Neutral at Susquehanna

Susquehanna believes Goldman is well positioned to benefit in fixed income from potential rising rates due to a fiscal cliff resolution and expects the company to gain share in FICC due to reduced competition. Price target raised to $149 from $127.

After conducting checks, RBC Capital believes that Amazon.com's investments in fulfillment centers could begin to slow in 2013. The firm maintains an Outperform rating on the stock.

BofA/Merrill believes the sell-off in Apple due to supply chain concerns is overdone and that valuation is at trough levels. The firm trimmed estimates but notes supply chain adjustments are common and recent supplier production cuts come after peak production ramps and double ordering. Shares of Apple are Buy rated with a $720 price target.

Here are the positions I am looking at for open:

I kept saying CMG would break out last week but that never happened. Yesterday was the start of what I think is a 2-3 day run for CMG over $300. Still love SINA for bounce over 50, and MON to $93 or so this week.