The market headed into 2014 at record levels. Stocks were bought hand over fist in 2013 but after such lofty gains, being a buyer here can be tough to rationalize. However: with central banks globally printing money, right now there is no clear alternative to stocks. Why buy stocks at record highs when there are plenty of stocks that have fallen and are poised to recover? And that brings me to a stock that I like in 2014.

Fusion-io, Inc. (FIO) trades for just over $9.00 a share. Unlike its competition, its stock has fallen almost 60% the last 52 weeks and from over $33 almost two years ago.

The company reports earnings tomorrow and this could trigger more selling for the stock, but I think we will see the opposite and the stock will rally over $10. I also like the gap down price of $13 to get hit within the next few months.

The stock looks to have bottomed last week at $8.32 and the shorts, who were in with over 32 million shares or almost 40% of the float less than a year ago, are down to 16 million shares or 20% of the float. A short interest of 20% is still sizable and will provide additional pressure to shares if the stock has indeed bottomed and begins to rally. A 50% reduction in short interest, in my view, means the shorts don't think there is much more downside to come and have started to cover, take their profits and move on. This is a good sign.

I am also long some $9 February calls at $.95 and will look to add on weakness.

Earnings are tomorrow and they could send the stock SHARPLY lower, in which case I will suffer a 50% or greater loss on my calls. FIO has dropped over 60% the last year for a reason. It could continue to decline but I think the risk/reward is compelling enough for me to take the risk and purchase calls. 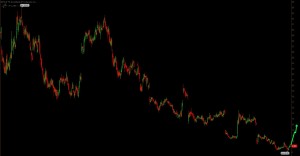