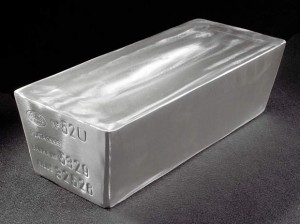 It was April 2011, and Silver had just touched $50. An amazing move from sub $10 in late 2008. Analysts and speculators alike cited many reasons for the 500% move. First it was the disparity between the price of Gold and Silver, which was near historic highs. Then it was the weakness in the US dollar, which had just just touched 73. Next was the rise of the SLV ETF, which created hundreds of tons of Silver demand during the Spring of 2011. With the Eurozone debt crisis gaining steam, folks also used Silver as protection from possible currency and market fluctuations, ie. a safe haven from risky assets. Others said it was simply supply and demand. And then of course there was the realization by many, that policies put in place by Central Banks around the world, would cause massive inflation.

While Silver was hitting highs in 2011 not seen since 1980, the Federal Reserve was nearing the end of its second round of quantitive easing. An unorthodox program that had folks buying Gold and Silver to protect themselves from possible inflation risks associated with the Massive Bond and Mortgage-Backed Securities purchases. Little did they know, that program would turn into QE-infinity a few years later, and the Japan would add fuel to the fire with its own massive easing program.

It does not take an economist to figure out that when Central Banks print money, inflation should follow. Buying Gold and Silver ahead of that move seemed like easy trades. And easy it was, as both commodities yielded huge returns for investors from 2009 until 2012.

But things have started to change recently. The concerns of a collapse in the Eurozone in 2011 are replaced by promises of the ECB to do whatever it needs to do to preserve the Euro. The USD is much stronger then in 2011, and the feared runaway inflation event has not happened and possibly the reverse could be happening, as their are now concerns of possible deflation. The U.S. economy is showing signs of recovery. The global financial collapse that was coming... the one that had folks clamoring for safe haven assets, is not happening. So WHAT HAS CHANGED SINCE 2009 to warrant the current 250% price increase in silver?

Cumulative inflation since 2009 is under 10%, meaning the price of silver adjusted for inflation should near $10. So is it demand that adds the extra $14 to the price of Silver since 2009? One would think so, as the Silver Coin has been met with record demand this year. But to me that is just typical of what this market does to folks. The ones who watch the commercials and TV ads entitled  "With Gold at Historical Levels, now is the time to get in before it goes to $2000" , promising huge returns for those who are in early on this Gold and Silver rally.  And unfortunately those will be the folks holding the bag when Silver is back under $10.

So in summary, we think Silver is ready for the next leg to the downside. One that will have Silver near $20, and some folks on the verge of more margin calls. With inflation not an issue, The Eurozone not in collapse, and with Silver still up 250% from its 2009, we think this is the time to grab some puts for the carnage.

Check out our Monthly chart for Silver and see for yourselves. And while scratching your head wondering why Silver is dropping again over the next week or two, ask yourself what has changed since 2009... 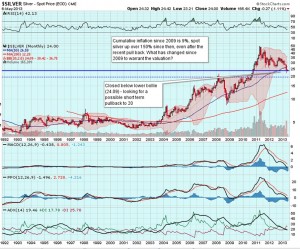