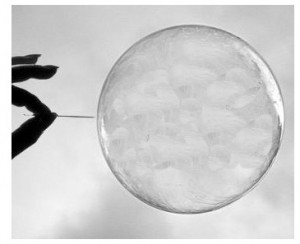 It was a little more then three weeks ago, when I shared my thoughts on Silver and where I thought it was headed.  Since then, Silver has dropped from $24 to $22.28 or more then 7%. Not the big move to the downside we were expecting, but it surely is a start. We have also been bearish on Gold and Gold miners over the past few weeks, based on the same theme... no inflation, no Eurozone crisis, and an impending bubble in commodities that will continue to burst.

Gold has recently tried to rally and break above the $1400 level, but the Bulls have been rejected each time in a swift fashion. It's only a matter of time before the Bears take hold, and Gold restests the April $1320 low.

Adding fuel to my Gold bear fire, has been the recent weakness in the Australian Dollar, a 'commodity currency'. The "Aussie" traded in the low 60's at the start of 2009 and rallied over 50% based on strong commodity demand in China and other regions. With that demand waning, and the Australian Central Banks cutting interest rates, it's only a matter of time before the Aussie heads under $90, which will help accelerate the pending decline in Gold. 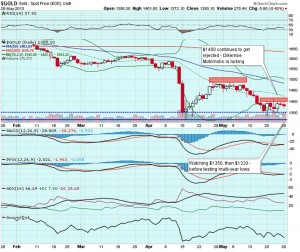 We are currently short the AUD/USD from May 19th, and hold puts on the GLD, SLV and calls on GLL, ZSL, and DUST.