Anyone questioning the power of Twitter(TWTR) and how it's revolutionizing the way people interact need look no further then the last 5 days and these two tweets: 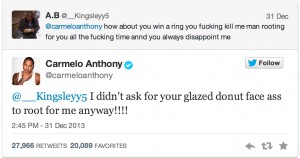 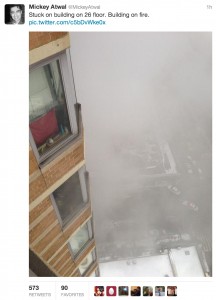 The first tweet came from a frustrated Knick fan (@__Kingsleyy5). It was an expletive laced plea to Carmelo Anthony to win a ring. The tweet must have struck a chord with the Knicks star; as he insulted the tweeter, calling him a 'glazed donut face ass.' Of course, the response caused an uproar, which is not a surprise, considering Carmelo is being paid $65 million over three years to bring a ring to New York City.

Tweets like the one sent from @__Kingsleyy5 are something sports stars didn't have to deal with in the past. Twitter (TWTR) has taken down the walls between fans and the stars they root for and has opened up the possibility for one-on-one interaction. Just the idea or the possibility that one of your idols or role models may respond to your comment is something that will continue to drive folks to embrace Twitter. Now that's power.

The second tweet came from someone less known, with only a few hundred followers on Twitter (TWTR) and going by the name of Mickey Atwal (@MickeyAtwal). It began with a tweet:

Stuck on building on 26 floor. Building on fire. pic.twitter.com/c5bDvWke0x

And then the drama unfolded in explosive fashion, as pleas for his safety and for the FDNY and NYPD to respond exploded on Twitter (TWTR). After 30 minutes of silence, Mickey finally responded:

Firemen here in our hallway. Telling us to stay put. Looks like fire started a few floors below. Family safe and in good spirits

And the Twitter universe, which had been holding its collective breath, finally exhaled. Amazing drama playing out over social media. A story that would be hard to replicate via normal media outlets, but is commonplace on Twitter. The once "less known" Mickey now has twice as many followers on Twitter - 840 at last count. Now that's power.

That power has translated into a stock that has been on fire to end 2013 and will probably continue to be a great story in 2014. Those two examples are just an extremely small sampling of how Twitter (TWTR) is changing how we live, and why I think it will continue to do so in the years ahead.