As the pre-market session opened this morning, Baidu ($BIDU) was off more than 4%, hitting $205, before finding some support. This type of move was not just some run-of-the-mill profit taking - there had to be some catalyst for this type of action. And catalyst there was, with one of the bigger contributors to Baidu's ( $BIDU) bottom line finally saying 'we have had enough'.

Anyone who has followed Baidu ( $BIDU) long enough, like I have, has seen the company endure plenty of negative press and possible headwinds to the growth investors have become accustomed  to.  When the stock was $18 (split-adjusted) it was porn. When the stock was $114 (after the 10-1 split) in 2011, it was the Sino-Forest scam that put a spotlight on all China ADR's. Then it was the FTC's investigation into the Big 4 accounting firms, and the Chinese companies they do work for. Through all that, Baidu ( $BIDU ) has continued to flourish. Heck, they even scared Google ($GOOG, $GOOG) out of China... or did they. China can be alot like playing blackjack, and sometimes it's best to fold your hand and leave the table like Google ($GOOG, $GOOG) did.

With over 70% of the share of search's in China, Baidu ($BIDU) is able to flex it's muscle, and most have paid the company over the years to ensure their product/company is top of mind...but  has that time ended? Seems some have had enough.

Yesterday, the Putian (China) Health Industry Federation, declared 'war' on Baidu ($BIDU) and urged it's member to 'stop paid web promotion activities' Their intention is to meet with Baidu ($BIDU) April 4th to resolve the matter, which they hope will lead to lower costs.

If Putian medical department goes to another channel, it could mean a loss of 7% of Baidu's ( $BIDU) revenues, which is a big deal for a growth stock. Couple that news with Baidu's ($BIDU) most recent earnings miss, as well as the possible IPO of Sohu.com's($SOHU) Sougou search engine ,and you have a recipe for possible disaster. It seems like only yesterday Baidu ($BIDU) was slow to transform into the mobile world. Lets hope they are not slow to fix this issue with the Putian (China) Health Industry Federation.

Here is the translated news piece:

Putian (China) Health Industry Federation official website of the information, which was formed last year, with the country's private hospitals than 8600 members, members will reach an annual turnover of more than 2600 billion yuan.

NetEase to be a President "always" to verify that this will indeed stop bid to promote discussion on Baidu, but only intention, will meet in April 4 finalized.

The meeting was chaired by the internal "Chinese Health Federation" A notice is displayed: "After careful study, Putian medical people after three decades of hard work, because the network is now bidding rules, leading to serious problems facing the industry, many medical institutions for the Internet almost company employees, so they just decided to stop calling all the folks paid web promotion activities. "

The circular also requires members of the event, as the event is crucial, determined at all costs, must comply with the requirements of all members. For non-stop promotion of paid units, whether or not the member is not Putian department hospital, "always will mobilize all forces have to click and make informed within the headquarters."

Xiaxiu Yu, vice president of investment 夏秀瑜 look good to NetEase Beijing said the hospital last year Putian Department spent on Baidu and promotion expenses up to 3.4 billion, "The cost of Baidu accounted for one-third of all income received in the promotion." Baidu last year's results, Baidu network marketing in 2014 on revenue of 48.495 billion yuan (US $ 7.816 billion), an increase of 52.5% over 2013.

Xiaxiu Yu told NetEase, this cost to the Department of the Hospital of Putian caused a huge expenditure. And Baidu as a search engine, its PPC mechanism itself unreasonable, "but it will not completely stop the currently uncertain, the two sides may also discuss the price."

It is understood that these medical institutions bidding and promotion expenses each month to pay up to thousands of Baidu. If you stop the promotion in Baidu, Baidu will cause greater damage.

NetEase contacted Baidu company, as of press time, Baidu has yet to respond.

I currently hold puts on Baidu ($BIDU) and may add or sell them as I see fit over the next few days. Below is the failed breakout chart I see on the stock. Happy Trading! 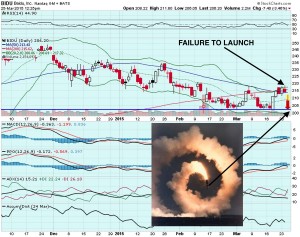