You have Greece on the verge of default on it’s debt, who almost slapped away help., Who’s Prime Minster decided on Sunday that he does not want to be a part of the process anymore. And now less then 12 hours later  it’s all about Italy stealing the headlines. Rumored to be the next Eurozone country to need a bailout of sorts.

When you go to a bank and try and take out a loan, and the bank tells you you’ll be paying 50% interest on that 10 year loan, you would think that’s a problem right? It’s a tad bid of an exaggeration but the

Italian bond rates have been soaring through the roof:

The yield on 10-year Italian government bond topped 6.6% to set a fresh euro-era high in morning trading, according to FactSet Research data.

These are all troubling signs. Obviously these concerns are things to look at when trying to figure out the market direction in US markets. So understanding the short and long term ramifications are key to creating a strategy to profit from it.

More to come tonight on that topic.

Since the plunge in late July to August, this "market" has been nothing short of a wild ride.  Even Bernacke can't seem to assuage investors as every headline out of Europe garners some type of over-reactive response from market participants.    Then again I think much of these violent swings are due to government intervention.  Absent government intervention we would probably already be on our road to growth.   We would have purged the system.  The risk takers who created this mess would be gone, and the market would allow the pieces to be picked up by those who played it smart.  That is the premise of the market.  Supply and demand.  Once the goverment meddles with it, it just isn't a market anymore, hence the wild ride we've seen since QE2 ended.

The FED is still meddling, and in the press conference this week Bernanke all but assured QE3, which accounts for the rabid buying we see on any and every dip this market takes.  The expectations world wide, by every investor is that the markets will always be backstopped by the central banks.  There is no risk.  The risk since March 2009 is missing out on the next centrally planned run up in assets, most notably equities.   Bernanke was telling everyone this week to be careful with your money, yet he's forcing EVERYONE into risky assets.

Ben Bernancke makes Corzine look like a genius  and I do believe down the road, years from now, people will wonder how we ever believed a word he said.  A red cape is all he needed for his devil costume this Monday.

As far as this weeks wild ride....  its great for options traders and I don't see this slowing down anytime soon.

We gapped up this morning on more Greek "news", then fell over $1.80 on the SPY, before embarking on a breathtaking ramp, that took us back over $126 on the SPY.  This rally continues to defy conventional wisdom.  There is still turmoil in Europe.  Greece might not remain in the Eurozone.  But at this stage, what this market is telling you, is that there is no where else to put your money.  The FED is forcing everyone into risky assets and thus far it seems to be working. 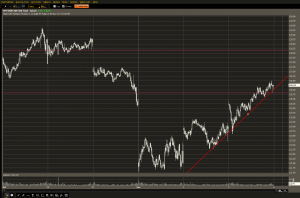 Currently there is a good chance we see $128.50 on SPY to fill the gap.  Until the markets come to their senses the bulls really have this market by the horns.  Most importantly tomorrow we have the jobs report.  A great figure could further embolden the bulls, while a bad one could give the bears a reason to get back into this "market"

The market notched another triple digit day, this time to the upside. When you see volatility like this, you can expect a big move coming very soon. News out of Europe continues to be the catalyst, irregardless of Ben Bernackes pledge today that they will do what it takes to keep the economy on pace.. ie. Quantitative Easing #3 is ready to go and in his warchest if needed.

Futures are down at the moment, indicating a 1% haircut at the open:

Headlines out of Europe that France and Germany have given Greece an "ultimatum" , has world markets on edge once again. We will see how this pans out. A greek default may have devastating effects on the market short term, although long term it may be a better option then the current scenario.
What will stop other countries like Italy or Portugal to get the same deal Greece is getting? Let them default, deal with the consequences, and move on. 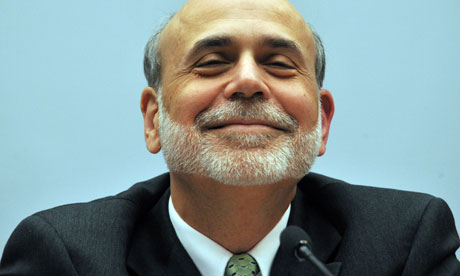