Facebook (FB) fell sharply at the open today, falling 12% to $33. This can only be good news for Apple(AAPL), as folks will look to go back into something that is actually extremely undervalued at $536. We expect Apple (AAPL) to trade over $560 this week and purchased the $565 calls for .68. We will continue to add as we think Apple (AAPL) we perform almost like a 'flight to safety' trade as the Eurozone mess works itself out. 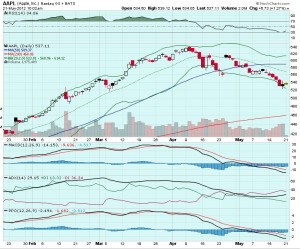 How is it that the most hyped IPO in recent memory closed just in the green instead of up 50% on it's first day? Was it from the constant upward pricing of the offering in the weeks prior to the IPO on the so-called pent up retail demand(THE SHEEP). Possibly, but maybe it because folks on the inside were getting a bit nervous about holding their shares longer then 1 day causing more selling pressure:

Even as outsiders line up to get a piece of Facebook, the social media giant’s latest filing shows that early individual and institutional investors will be selling nearly 84 million more shares than originally planned. And even as the frenzy surrounding the offering builds – or perhaps because of it – Facebook is facing renewed scrutiny over its business model and the risks it faces.

The company revised its S-1 filing with the Securities and Exchange Commission twice in two days this week, with the latest document reflecting new plans to sell more than 421 million shares, up from 337.4 million, as early investors look to cash out more of their holdings. Those investors would face a lockup period of at least 91 days during which they could not sell once the stock is publicly traded.

But maybe the better questions to answer is, "Why didn't Facebook(FB) close in the red?". That is a good question, considering the issues that delayed Facebooks(FB) opening on the Nasdaq were related to traders abilities to cancel orders. Thats right folks... canceling orders and not buying stock. So if the stock closed green and retail wasn't keeping her green, who was? Who would have the most at stake for having the largest IPO in recent memory finish green? Well that would be it's lead underwiter Morgan Stanley (MS). I can just picture the meetings that went on over the past few months... "Yes Mr. Zuckerberg, your companies stock will soar on the first day of trading as we pump it to every investor we can find"

How do they get away with this? How are they allowed to manipulate the stock price to ensure they save face??? Take a look at the 1 minute chart of Facebook, and you can see someone with deep pockets was keeping her above $38 with ferocious buying volume. 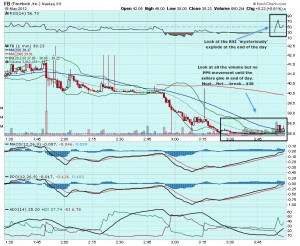 A clip from the Wall Street Journal tonight that makes my blood boil:

After the problems began on Friday, Morgan Stanley, which led a group of 11 Wall Street banks, stepped in to buoy the share price, according to people familiar with the matter. In its role as the deal's so-called stabilization agent, Morgan Stanley could continue to support the shares through a pool known as an overallotment. But people familiar with the matter say the bank has no plans to use its own capital to prop up the shares in the days ahead.

So lets get the facts straight as I see them: 1. Morgan Stanley and the other underwriters hyped the IPO and continued to raise the IPO price right down to the last day on the supposed increased demand(which there was not). 2. Morgan Stanley provided bid support on the stock to ensure it didn't fall under the $38 mark. 3. The amount of shares to be sold increased millions right up to the day of the IPO.

Let me put this in a phrase most will understand... This was an orchestrated Pump and Dump!

Not only that, it was stock manipulation at it's finest. Here is the definition from the SEC website:

Manipulation is intentional conduct designed to deceive investors by controlling or artificially affecting the market for a security. Manipulation can involve a number of techniques to affect the supply of, or demand for, a stock. They include: spreading false or misleading information about a company; improperly limiting the number of publicly-available shares; or rigging quotes, prices or trades to create a false or deceptive picture of the demand for a security. Those who engage in manipulation are subject to various civil and criminal sanctions.

Once again the 99% are left holding the bag, while the 1% are laughing to the bank. Take a look at those who made out on Facebooks(FB) first trading day: 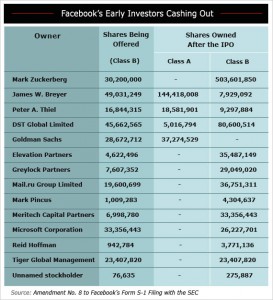 We shall see where Facebook (FB) trades on the coming days and weeks. I have an odd feeling it wont be much higher then it's close on friday. But who knows, when the 'Free market" is not really that free. 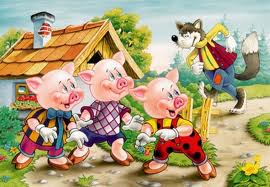