Stock futures find themselves flying high on another overnight levitation session.  Last week we saw similar buying frenzies send the market higher, only to see much of those gains erode into the afternoon.

Last Friday started strong as well, stocks were higher into the jobs report, and then fell off a cliff after the report.  I think we all know what happened next.  It's been an almost $13 rally on the $SPY from the lows of last week.  The relentless buying spree continues, with some of the buying furious enough that if this were a football game the referee would have blown the whistle already.  There is no mercy rule in the stock market.  Prices can run unabated to the upside, but when similar price action comes to the downside... oh boy.

Look no further than YUM.  The stock is down big on an earnings miss.  Maybe it's priced in, maybe its not.. .but surely when a company misses earnings expectations the stock will sell-off?  That is usually how it works.  Report a terrible earnings season, expect the stock to react in a terribly negative way.

One of YUM's analysts is not that happy with the price action of the stock this morning. The analyst equated the fall of YUM stock to a: DOOMSDAY SCENARIO.   Yum's stock has more than doubles the last 3 years.  100%+ gains are normal and a 14% drop is DOOMSDAY.

As is the case for the stock market.  Lower stock prices do not benefit many people.  Goverments want stocks higher, Central Banks want the stock market higher, people with money in the stock market want the stock market higher... while you could say sentiment for stocks is low, almost nobody wants it to go lower.  But lower it does go.  There are buyers and sellers - which is what makes it a market.  Conspiracy theorists will tell you many of the buyers are the central banks themselves.  And if you trade in Japan and China  indeed they are.  China has basically hung anyone shorting the market or selling stock.  Japan has embarked upon a massive scheme to inflate its stock market and devalue its currency.  Here in the U.S. the Plunge Protection Team has made numerous appearances in the market to save the day.  And frankly, it worked.  Stocks earlier this year hit a record high.  Any plunge protection team buys, especially the ones in 2008, were great for the taxpayer.  The PPT, buying at the lows during the last 6 years, if it were a hedge fund, would probably be one of the more successful ones out there.

But the invisible hand being used to guide the markets.  It's not healthy.  It's the 50 year old still sucking on the pacifier.  That pacifier is filled with cheap money.  Take it away and that 50 year old kid has a nasty tantrum.

We are going to look back 10 years from now and wonder what the heck these Central Banks were thinking.  Economic growth isn't built upon the expansion of monetary policy.  It's not built upon massive, artificially inflated debt.   I hope for the sake of my children, my family, and everyone else, that I am wrong.  That everything is going to be ok.  That the Central Banks truly do know what they are doing.

As economic data continues to weaken and charts remain bearish, I still think stocks are heading lower.  I rode this market higher for most of the historic bull market move from 2009.  The trend was up.  Now that trend is broken. 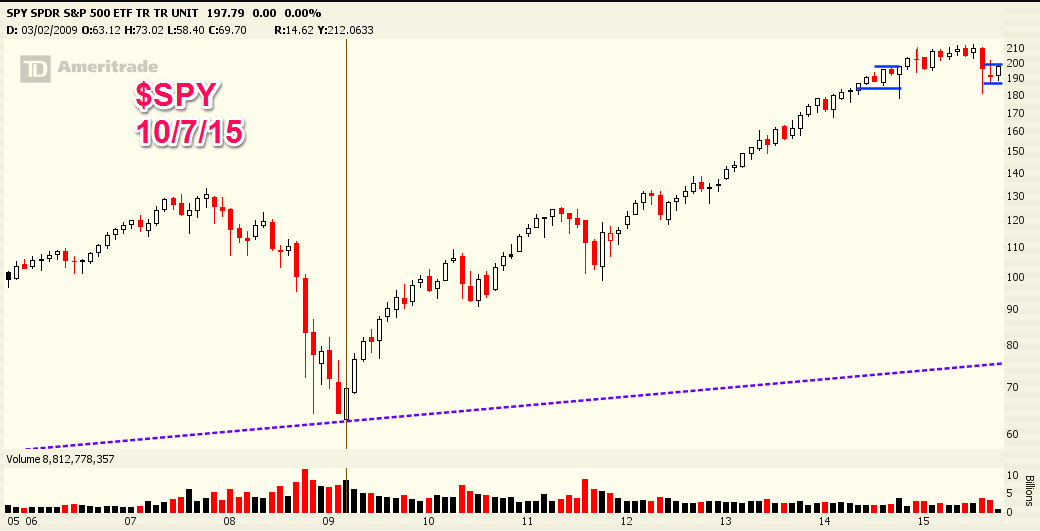 I think there is a very good chance we have seen the top for the market.  All those top calls of years past were doing so while the market was in rally mode.  There is a changing of the guard going on.

See you in the chat room!