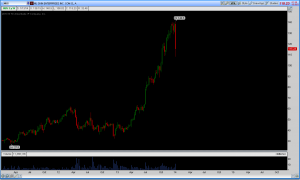 Just two days ago I called for a sharp decline for $NUS. When the stock failed to breakout after meeting resistance I purchased the $130 puts at $.75 and $.80. I posted my trade to optionmillionaires private twitter subscribers so they could see where I thought the stock was heading. I also posted my trade to the chat room at optionmillionaires.com. The stock rallied but I still held firm as those options declined in value, going as low as $.40 yesterday.

Call it luck, chance or whatever you want but just two days ago I was calling for $NUS to collapse. Not just to pull back but to crumble. Those who bought the puts before this move made a small fortune today.

We aren't perfect traders at optionmillionaires.com and have never claimed to be. Anyone who tells you they have a 100%, 90%, 80% success rate trading out of the money options is outright lying to you. However, if you look back to as recently as last week with JB's $ISRG calls, we have the uncanny ability to consistently locate big option gains.

Where does $NUS head from here?

While the analysts will tell you to buy this dip, I think it's just the beginning of an epic collapse. 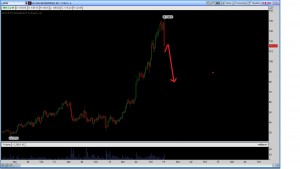