Another tremendous week for the market has passed offering up trading opportunities for downside and upside alike.  Yes... despite the massive rally this week there were quite a few stocks that were pulling back.

I had some $CAT and $MSFT put options for earnings that were blown out of the water the next day, proving yet again than I am not the perfect trader.

On the flip side the late week buying frenzy turned zero's into hero's.  Some trendous trades this week in the chat room, from $AAPL to $SPY to $NFLX to $BIIB. 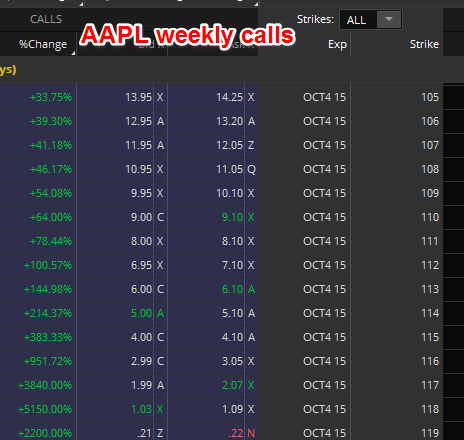 $GOOGL's 7%+ earnings rally turned options into 200% - 300% gains this time around.  Nothing like we saw last earnings season: 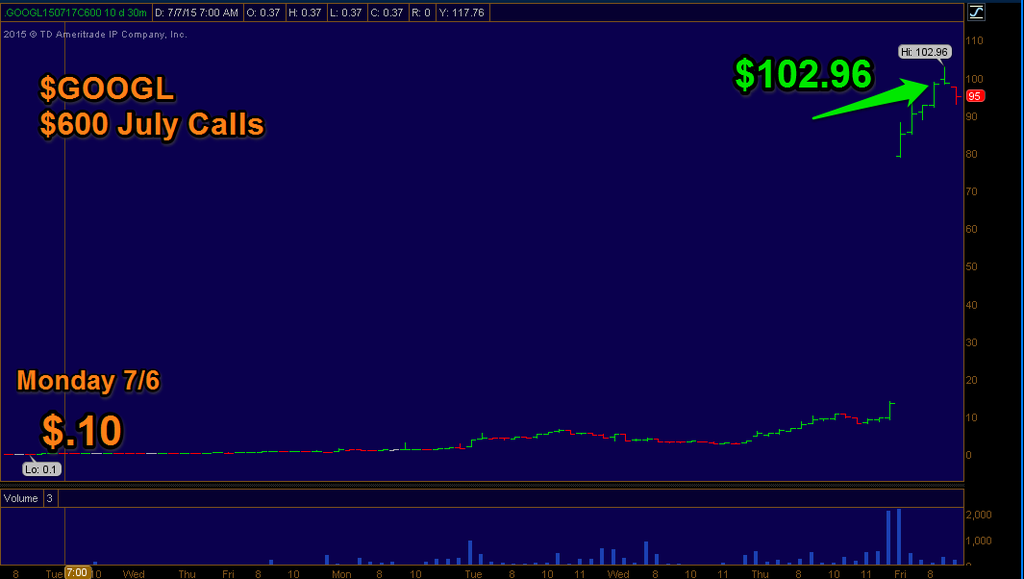 but solid gains none the less: 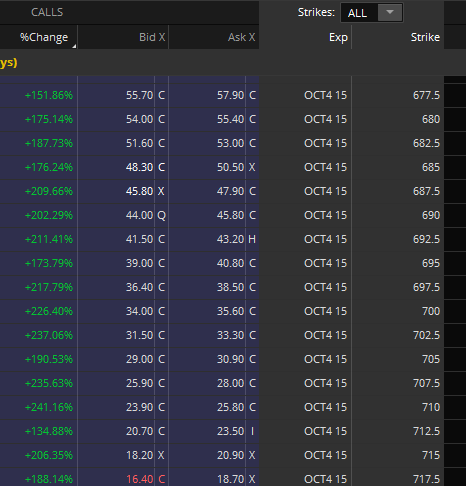 How about MCDonalds?  The stock rallied some 8% to a fresh record high this week.  Those who bought Call options were sitting pretty. 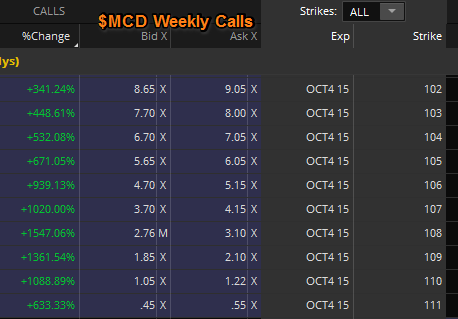 It wasn't easy being long the market all week.  The action late on Wednesday looked rather grim as stocks closed at session lows.  But those losses proved to be short lived.

Thursday yet again provided the turning point for the market with a Draghi fueled buy-o-thon sending stocks soaring throughout the session. 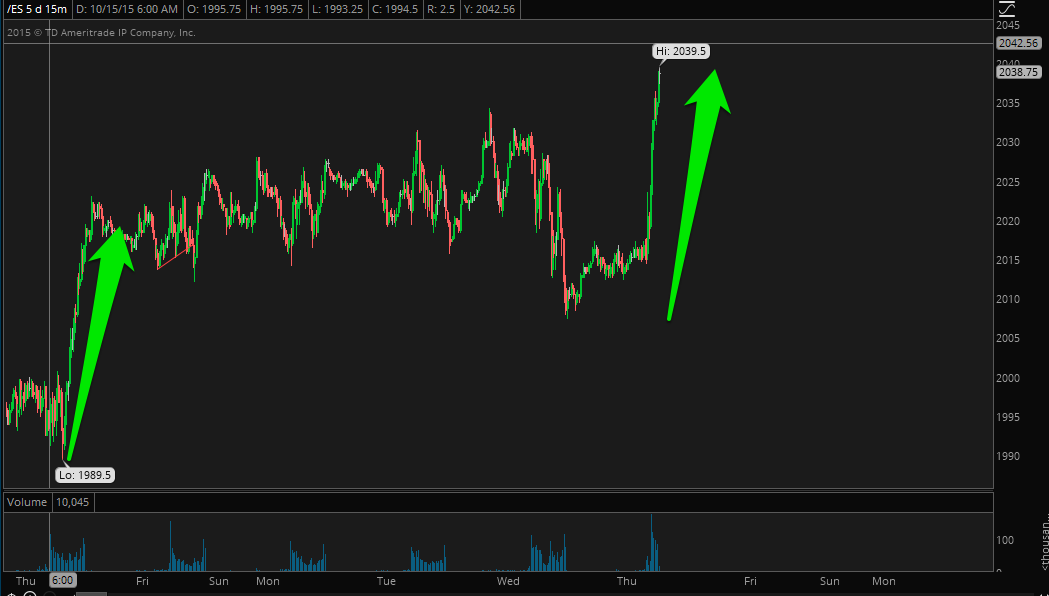 China kept the buyers engaged on Friday as the markets spiked higher still.  It was a furious two day rally, one clearly made for the machines, as no human can withstand 4 hours+ of non stop spikeage.

How about Facebook?  On Friday it opened the trading day over $100 a share, and rallied to almost $103 before the closing bell.

Google was not as impressed:

The US Dollar Index looks poised to break into triple digits again.  This will bring corporate earnings into question again.  We have seen this theme play out even at the start of this earnings season.

The St. Paul, Minn.-based maker of adhesives, abrasives and films, whose best-known products include Scotch tape and Post-it notes, said Thursday that profit edged down 0.5% and sales fell 5.2% in the third quarter as a stronger dollar cut the value of overseas receipts.

The US Dollar deserves a close eye over the next few months.  It's a juggling act for the FED as other Central Banks race to devalue their currency, a stronger US Dollar will not help corporate earnings, emerging markets, and commodities. 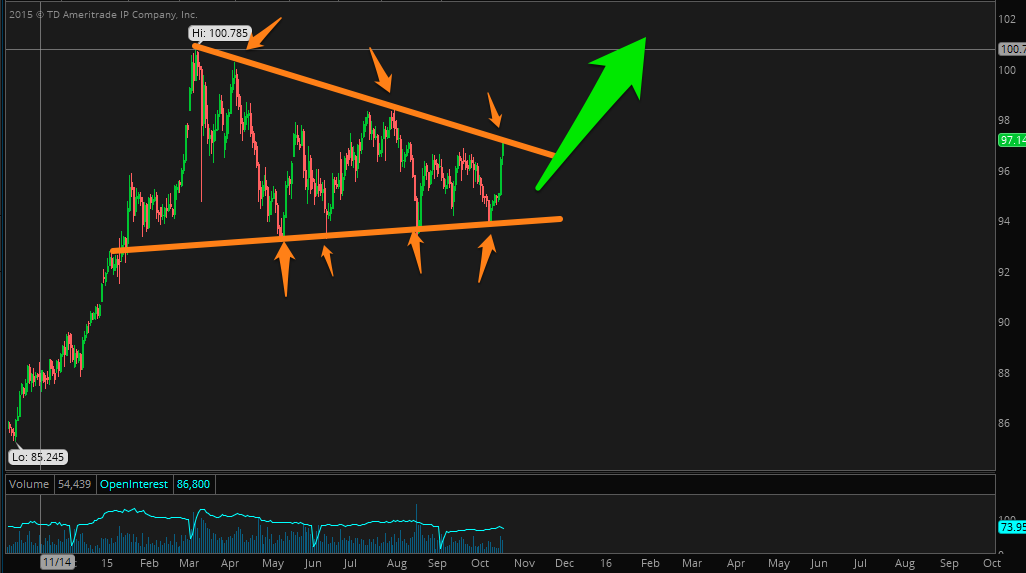 But for now the stock market doesn't seem to care about anything other than what Central Banks have planned next.  I'll get more into that later this weekend.

We have more earnings coming this week.  A sharp move higher for $AAPL could move the NASDAQ to a new all time record high.  Are you kidding me?  That sounded like a fairy tale about 3 weeks ago.  Today it is reality.

Here is a breakdown of the most anticipated earnings from earningswhisper.com

Earnings season is off to a big start, with stocks soaring and  getting crushed.  $SKX just one of many falling.  2015 is proving yet again to be a year where not all stocks are following the market trend.  The door is open again for stock pickers.

Some Scans and chart patterns to peruse this weekend:

and finally - we are in the early stages of the Three-Some Bubble.

Have a Great Weekend.

If you are not yet a part of our community, there is no better time than now to sign up.