For all intents and purposes today is Friday.  It's the last trading day of this holiday shortened week.  Tomorrow the markets are closed for Good Friday.  Where is this market headed?

I covered this past weekend where I think the market could be headed.  The first three sessions of this week has been a digestion of the recent move out of the wedge.   While tech has seen some downside after Mondays' early ramp, the action still sits at trend line support.

$IWM continues to hold the line at support not giving up that $150 level:

The $SPY has traded sideways, albeit in a large range.  Either a bottoming process or digestion before the next test of the 2018 lows.

and despite some of the large price swings we have seen, the VIX remains under the recent highs, unable to pierce and hold over 25.

Today, perhaps the market will give us the signal we have been looking for all week.

A break of $150 support on IWM,  trend-line support on $QQQ, and a spikeand hold  of the VIX over 25  will tell us that the market is setting up for a decline to at least the 2018 lows.

Current momentum readings have rolled into negative territory.  Over the last 2 years there has been a swift reversal out of these conditions, marking a great buying point for stocks.  If momentum swings back out of negative territory we will get a buy signal for stocks, marking the bottom of this quarters sell-off and possibly a bottom for all of 2018.

It's too soon to know which path the market is taking.  Higher interest rates,  Libor is soaring, trade wars, tariffs, there are plenty of excuses to sell.  In the past, the more excuses to sell the sharper the reversal higher for the market was.

Are we seeing a tech wreck like we did in 2014?  It came around this time ending in the middle of April.  The bears were pounding their chests back then too , with $QQQ at $90 a share: 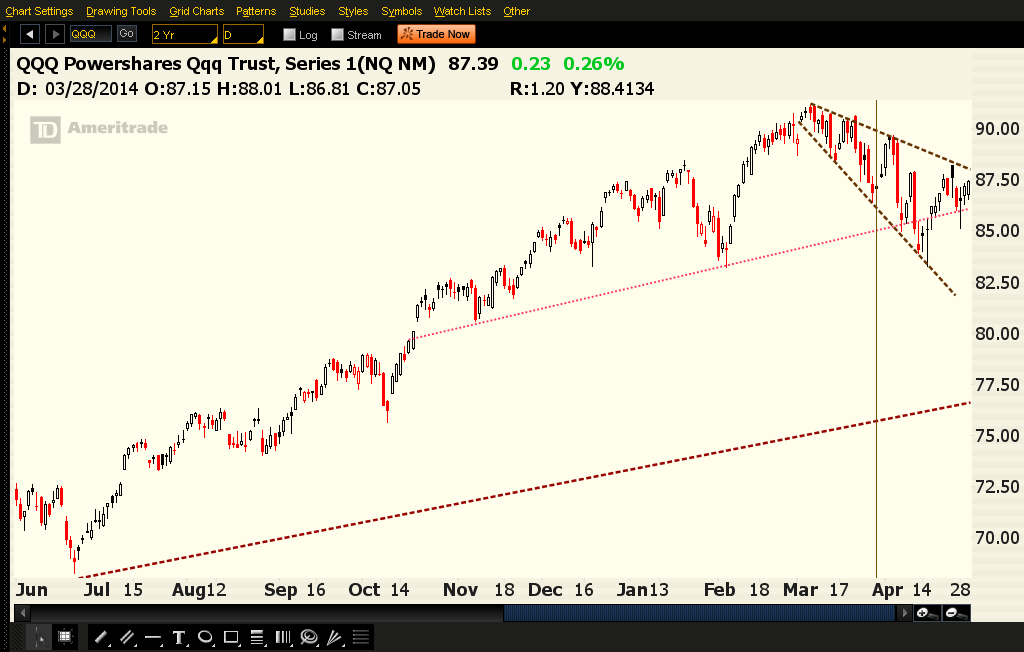 It recently hit $172 less than 4 years later.  Yep.  While being bearish the last 9 years on this market may get you a regular  CNBC appearance or countless followers, likes and retweets on Twitter, it has been the wrong bias on a medium and long term basis.

If we have seen the top for this market, and prices are setting up for a sharp move lower over the next 6-12 months there will be plenty of time to trade for the downside.  However if we've learned anything since the 2009 lows, these pull backs have been great buying opportunities with prices usually ending up at new record highs.

See you in the chat room and have a great long holiday weekend.