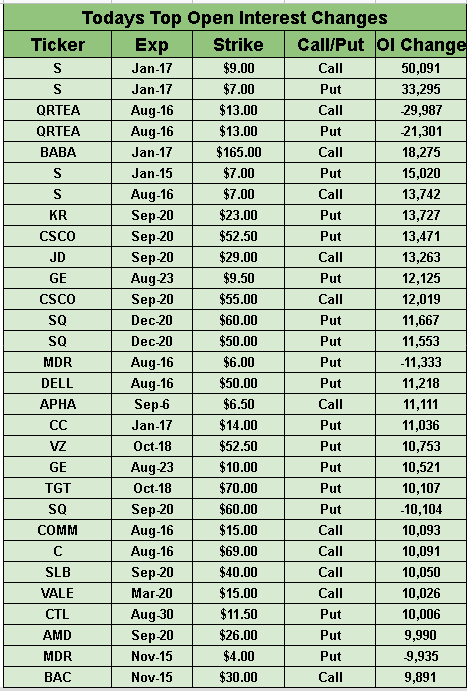 Another round of selling is taking place across the globe following the worst week of the year for the S&P 500. It all started with the Fed's more-hawkish-than-expected policy outlook, but quickly morphed into trade uncertainty as tensions between Washington and Beijing re-escalated. Amid a sea of red in Asia and Europe overnight, Dow futures are now off by 330 points and the S&P 500 and Nasdaq are down 1.3% and 1.7%, respectively. With new risks from trade wars, stocks head into the final weeks of summer vulnerable to a pullback or even correction.
Go deeper: Entering and exiting markets based on tweets? Jeff Miller discusses.

The latest proposed U.S. tariffs on China are also threatening to unleash a whole new front in trade hostilities - a currency war. The yuan overnight tumbled past the psychologically important level of 7 to the dollar for the first time since the financial crisis, a move that can be seen as part of the PBOC's defense. President Trump and many other U.S. officials have long accused China of weakening the renminbi to make its exports cheaper and gain an unfair advantage in trade, although Beijing has denied doing so.
Go deeper: 'The Chinese Market Will Never Be The Same' writes MTS Insights.

The Hang Seng index slid nearly 3% overnight as protests in the Asian financial center spread to new neighborhoods and turned violent once more, with demonstrators calling for autonomy, full democracy and the ousting of city leader Carrie Lam. A general strike further paralyzed parts of Hong Kong, disrupting railway lines, flights and traffic. In a press conference, Lam warned of a "very dangerous situation" ahead, while Beijing said it would not let the situation persist.

A sharp deterioration in global risk sentiment is pushing investors into safe haven assets, with gold climbing to fresh multi-year highs, up 0.8% to $1469.10/ounce. The flight to safety is also evident from the ongoing freefall in U.S. Treasury bond yields, with the 10-year falling 9 bps overnight to 1.76%. Another big winner of the market turmoil? Bitcoin (BTC-USD). Prices climbed 9% past the $11,000 level for the first time since mid-July to lead gains among the biggest cryptocurrencies.

Chinese authorities have proposed rule changes that would for the first time allow local investors to buy shares of some popular technology companies listed in Hong Kong. Xiaomi (XI) and Meituan Dianping (MEIT) went public in Hong Kong last year, the first major tech firms to use new rules permitting weighted-voting rights, also known as dual-class shares, on the city's bourse. Alibaba (NYSE:BABA), which uses the structure and is listed in New York, is also said to be readying a Hong Kong listing under the new regulations, which could raise as much as $20B.

Berkshire Hathaway (BRK.A)(BRK.B) recorded operating earnings of $6.14B in Q2, which slipped from $6.89B in the year-ago quarter, as insurance underwriting results plunged by 63%. The report also showed a record $122B in cash, although the company didn't yet receive H1 financial statements from Kraft Heinz (NASDAQ:KHC), which it regards as its most "significant investment." A growing cash hoard suggests a big upcoming acquisition, but in a letter to shareholders this year, Warren Buffett said prices "are sky-high for businesses possessing decent long-term prospects."
Go deeper: Hypothetical dividend payout ratios of BRK.A.

Flint out as HSBC CEO

Shares of HSBC (NYSE:HSBC) are down 2.5% premarket on the surprise news that CEO John Flint will step down after 18 months in the job. Flint had set out plans to invest $15B-$17B over three years in areas including technology and China, but said new leadership was needed to meet "an increasingly complex and challenging global environment." HSBC also reported H1 2019 net profit of $12.4B, up from $10.7B in the year-ago quarter, helped by a surge in retail banking and Asia revenues.
Go deeper: Quant, SA, Sell Side ratings of HSBC.

Hoping to revive merger talks with Fiat Chrysler (NYSE:FCAU), Nissan (OTCPK:NSANY) and Renault (OTCPK:RNLSY) are reportedly trying to reach a deal to reshape their global alliance. Nissan wants Renault to reduce its 43.4% stake in the Japanese automaker, according to emails reviewed by WSJ, while negotiations could lead to an initial memorandum of understanding on restructuring as early as September. FCA abandoned its $35B merger offer for Renault in June, blaming French politics for scuttling the deal (the government owns a 15% stake in Renault).

The first FAA-approved 'beyond-line-of-sight' drone flight has been completed, in a pilot program with the University of Alaska Fairbanks over an oil pipeline. The major advance is welcome news for retailers like Amazon (NASDAQ:AMZN) seeking to speed up deliveries by drone, which are currently required to remain in the operating team's sight to spot and avoid aircraft and other obstacles. Amazon, which has been using drones for U.K. deliveries since 2016, said in June that it expected to start doing so in the U.S. "in months."
Go deeper: 'Amazon's Next Big Thing' by Daniel Jones.