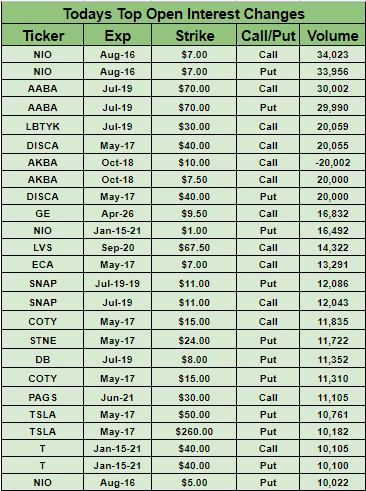 Futures are lower after the Easter long weekend that could make Monday the quiet before one of the busiest weeks of the earnings season so far. Earnings reports before the bell today include Halliburton (NYSE:HAL) and Kimberly-Clark (NYSE:KMB), while Whirlpool (NYSE:WHR) and Celanese (NYSE:CE) are among those reporting after the close. Big names printing later in the week include Procter & Gamble (NYSE:PG), Twitter (NYSE:TWTR), Facebook (NASDAQ:FB), Microsoft (NASDAQ:MSFT), Tesla (NASDAQ:TSLA), Amazon (NASDAQ:AMZN), Ford (NYSE:F) and Chevron (NYSE:CVX).

The U.S. is preparing to announce today an end to sanctions waivers granted to importers of Iranian oil last year, according to Reuters and Washington Postsources. Oil prices spiked on the news, with Benchmark crude oil futures up 2.6% and U.S. West Texas Intermediate up 2.3% in early trading.

Tesla (TSLA) will webcast its Autonomy Investor Day today on YouTube at 11 a.m. Pacific. The company will present its self-driving technology roadmap. Rumors suggest Tesla will demo the latest developments in its Full Self-Driving system and Elon Musk could tout his ultimate promise: robot taxi fleets.

Samsung (OTC:SSNNF, OTC:SSNLF) has postponed its April 24 launch event for the Galaxy Fold in China. The company didn’t provide a reason or a new event date. Journalists reviewing the premium devices experienced screen issues after removing a protective film. Samsung said it was looking into the matter. The premium foldable device is meant to launch in the U.S. and other select markets on April 26.

The CIA has reportedly accused Huawei of being funded by Chinese state security amid US-China tensions about concerns the tech company’s equipment could be used for espionage. The political pressure apparently hasn’t hurt Huawei, with the company reporting its first quarterly results and a 39% Y/Y revenue growth. Bad news for Huawei is generally seen as good news for Nokia (NYSE:NOK) and Ericsson (NASDAQ:ERIC).

In a New York Times report, Boeing (NYSE:BA) workers say production of the 787 Dreamliners also faced production issues with the company culture reportedly valuing “production speed over quality." A former Boeing quality manager turned whistleblower says he hasn’t yet seen a plan out of that production that he’d “put my name on saying it’s safe and airworthy.” Boeing denies the claims.

Edge cloud platform Fastly (FSLY) has filed for a $100M IPO to list on the NYSE. The company competes with Akamai (NASDAQ:AKAM) and Limelight (NASDAQ:LLNW) in legacy CDNs and traditional data center and appliance vendors like F5 (NASDAQ:FFIV) and Citrix (NASDAQ:CTXS). The IPO could value Fastly at more than $1B.

Bidding for the former Fox regional sports networks has reached its endgame with Fox (NASDAQ:FOX) Business reporting Sinclair Broadcast Group (NASDAQ:SBGI) has placed the top bid. Sinclair is reported to have bid about $10B for the nets, which Disney (NYSE:DIS) is selling as a regulatory requirement for the completed Fox media asset acquisition. Other bidders included Liberty Media (NASDAQ:FWONA), Major League Baseball and Ice Cube's Big3 basketball league.

JPMorgan (NYSE:JPM) to widen use of blockchain system.