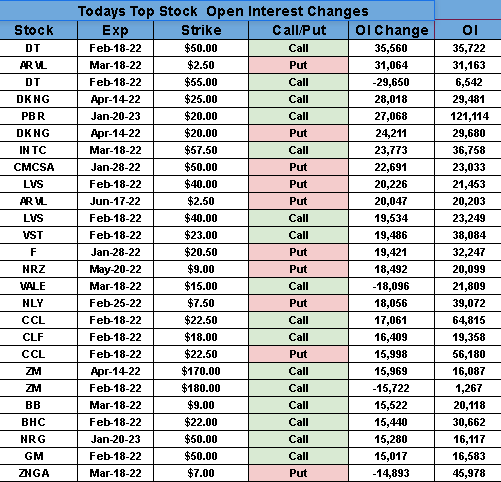 The warnings over Ukraine are coming in fast and loud, with the U.S. State Department on Sunday ordering diplomats' family members to leave the country. "Military action by Russia could come at any time," the U.S. Embassy said in a statement, and the "United States government will not be in a position to evacuate American citizens in such a contingency." Meanwhile, Secretary of State Antony Blinken met with Russian counterpart Sergey Lavrov in Geneva on Friday, though no diplomatic breakthroughs were reached as Moscow amasses an estimated 100K troops along its border with Ukraine.

What does Russia want? The country has pointed to NATO's eastward expansion and is seeking a pledge that Ukraine will never be allowed to join the military alliance. Don't forget about historic, cultural and economic ties to the country, which was under Russian rule during Soviet days. Russia even annexed Crimea, a strategic peninsula on the Black Sea, in the aftermath of the Maidan Revolution in 2014, and aided a rebellion in the eastern Donbas region, where pro-Russia separatists now control breakaway parts of Donetsk and Luhansk.

Russian shares came under further selling pressure today amid the latest tensions, with the MOEX benchmark stock index tumbling 5% and taking its losses to 15% YTD. While the U.S. has rejected pressure to immediately escalate sanctions, saying it would limit options in the future, President Biden is considering deploying troops to NATO allies in eastern Europe and the Baltics. "The purpose of those sanctions is to deter Russian aggression," Blinken told CNN's State of the Union, "and so if they're triggered now, you lose the deterrent effect."

Energy on watch: Nearly half of Europe's gas supplies are imported from Russia, raising concerns about the willingness of some European nations to take a stand against Moscow. The continent is already dealing with an energy crunch that has resulted in some of the highest heating and electricity bills in the developed world. Looking to stave off such a threat, talks are currently underway with Qatar - the world's largest exporter of LNG - and other nations, in case a Russian incursion was to disrupt energy supplies to Europe.

An interest rate increase from the Fed this week would be a surprise, with most betting on a March start to the new hiking cycle, but some are still raising their expectations around the pace of tightening. Over the weekend, Goldman Sachs became one of the first on Wall Street to forecast the possibility of more than four rate hikes in 2022 as the central bank tries to extinguish red-hot inflation. As of the last reading on Jan. 12, the U.S. Consumer Price Index breached the 7% Y/Y level, running at its highest 12-month pace in nearly 40 years.

Quote: "We see a risk that the [Federal Open Market Committee] will want to take some tightening action at every meeting until the inflation picture changes," Goldman economist David Mericle wrote in a note to clients. "We also increasingly see a good chance that the FOMC will want to deliver some tightening action at its May meeting, when the inflation dashboard is likely to remain quite hot. If so, that could ultimately lead to more than four rate hikes this year."

Remember, it was only two weeks ago that Goldman touted a "four hike" forecast and futures markets have gone a long way since then to catch up with the expectations. Traders are pricing in nearly a 95% chance of a rate increase at the March meeting, and a more than 85% chance of four moves in all of 2022, according to the CME's FedWatch gauge, while similar chances of a fifth rate increase have now moved to nearly 60%. Goldman also sees the Fed starting to cut its nearly $9T balance sheet by $100B a month from July, with the process expected to run more than two years and shrink the balance sheet to a still-elevated $6.1T-$6.6T.

Market movement: Fear of impending hikes has weighed on the market, triggering the biggest rout for the Nasdaq since the pandemic began in March 2020. The tech benchmark slumped a total of 7.6% last week, and things are turning south again this morning, with futures tied to the index falling nearly 1% overnight. Rising Treasury yields aren't always bad for stocks in the long-term, but expect more volatility ahead as traders continue to digest the economic landscape.

The outlook for vaccine maker stocks, which was glowing not long ago, is increasingly turning less rosy. A combination of factors is leading to the situation:

Breakdown: a) Additional boosters - at least as the vaccines are currently formulated - may not be as effective, especially against the Omicron variant, b) Given the large number of COVID cases in the past few months caused by the Omicron variant, herd immunity may become closer to reality in many parts of the U.S. and around the world as even those who are unvaccinated develop antibodies, c) Even though all the COVID-19 vaccine makers have said they are working on Omicron-specific vaccines, the availability of those vaccines may arrive too late as the Omicron wave appears to have peaked on Jan. 15, according to CDC data.

All of the companies making COVID vaccines are down year-to-date, but those companies whose revenue disproportionately relies on the jabs - Moderna (MRNA), BioNTech (BNTX), and Novavax (NVAX) - have especially been hit hard. Pfizer (PFE), Johnson & Johnson (JNJ), and AstraZeneca (AZN) are also down, but much more modestly in comparison, likely because their bottom lines are impacted by much more than vaccine sales. Booster hesitancy has also been seen among the population, especially with periodic administration of doses every four to five months.

Less frequent boosters? "Once a year - it is easier to convince people to do it. It is easier for people to remember. So from a public health perspective, it is an ideal situation," Pfizer CEO Albert Bourla said in an interview on Saturday. "We are looking to see if we can create a vaccine that covers Omicron and doesn't forget the other variants and that could be a solution."

Nothing gets better headlines in the cryptoverse than Bitcoin (BTC-USD) being down 50% from its latest high. Traders are now debating the path forward amid an onslaught of selling pressure in the space, ranging from a bloodbath in the speculative tech sector to a mining and trading ban in Russia. Bitcoin plunged to $34,000 over the weekend (before paring losses), down from its record of almost $68,000 in November, and fell another 7% overnight to crash almost below the $33,000 level.

Where are the HODLers? While Bitcoin is known to be volatile, the most recent forecasts from Cathie Wood's ARK Invest was calling for a surge to $500K, while MicroStrategy (MSTR) CEO Michael Saylor saw an eventual "6-handle," or a ride up to $6M. In fact, the latest decline has wiped out more than $600B in market value, and over $1T lost from the aggregate crypto market. Reports also suggest that the Biden administration is preparing to release an initial government-wide strategy for digital assets as soon as February, which could task federal agencies with assessing risks posed by the currencies.

Cryptos "leave me increasingly feeling like the boy watching the naked emperor passing in procession. So many significant people and institutions are admiring his incredible coat, which is so technically complicated and superior that normal people simply can’t comprehend it and must take it on trust. I would not. In such situations I have learned to prefer avoidance to trust," wrote famed fund manager Jeremy Grantham in a recently published article, entitled Let The Wild Rumpus Begin.