Markets continued their rally into Thursday with the Nasdaq and Small caps leading the charge, while the DOW closed slightly in the green. The $SPY tested the $190 level, only to fail and fade near the end of the day on the HPQ pre-release of earnings.

It was a huge day for Zillow as the stock broke into new all-time highs and held the gains through the day. A very strong sign. I locked in most of my calls and will close the rest tomorrow.

CRM provided a great opportunity and the $52.50 calls  alerted in the chatroom and private twitter @ .07 hit 1.74, while the $53s from yesterday at .31 hit 1.32. These bounce plays on earnings can be one of the most rewarding if timed right, and with some luck.

SHLD reported a weak report but think folks are starting to see the light, and the stock rallied from being down big at $34, to being up over 4% at the close . The SHLD calls were on the watchlist and they are up slightly, although they are June strikes and will have time on their side. Think the stock breaks over $40 soon...

GOOGL broke above the 50dma and looks set for a test of $560 tomorrow, where I may look to lock some in before the weekend. GOOGL tends to spike in the AM, and will look for an exit of some there.

I also added some SSYS calls and like the stock to retest $100 on the major breakout today.

Today was a great day, and shows why one or two days in option trading can make up for a few days of futile trading.

I say this quite a bit, but sometimes its best to tune out the noise and the sensationalism that occurs all over the financial media...

Here are my current positions: 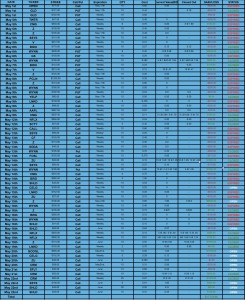 Still working on the new private twitter feed so stay tuned to the old ones for updates!

Have a great evening!