There seems to be a strong potential for the market heading to the 50DMA sometime this month. Yet, in the grand scheme of things I still remain bullish. If you look back at a longer-term chart, the month of September has just been a consolidation month, where we see some of the excess removed from the market. The daily chart is seems to indicate be a prolonged bull flag from the SPY rally in August. There are many stocks that have been sold, mainly the high beta stocks, to allocate for Alibaba. But, many hedge funds did not end up getting a big stake in Alibaba. In my opinion, this means that the money will come back to work soon; it will come back to the tech sector. 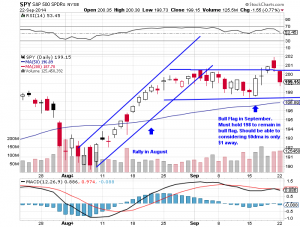 There is a lot of money sitting on the sidelines after Alibaba. In the week prior to the IPO there was tremendous selling in many tech stocks. Now, those tech stocks are near oversold territory. The last two weeks of September has been historically bearish, so it would not surprise me to see a 2-3% pullback from the highs. If this would occur I think it would present a very good opportunity to go long December SPY/QQQ calls.

There are a few metrics which indicate to me that the market is approaching oversold territory. The first is the NYMO (market breath indicator). The NYMO currently sits at negative 58. Assuming there is a pullback down to the 50dma, we should see the NYMO hit negative 80-90, an extremely oversold condition. Furthermore, this would make a double bottom with the low made in August. 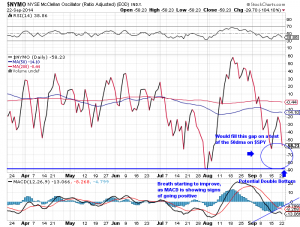 Now, I am looking at the market through an optimist’s point of view. I believe that we will have a Q4 rally, due to seasonality. In addition, I do not see many catalysts that could cause a major correction. The FOMC seems to be maintaining monetary policy, and there does not seem to be any geo-political issues on the horizon (ISIS has not influenced US markets and I do not think it will unless they pose a direct threat to the US). If you were to look at the technicals from a pessimistic point of view, you would argue that breath is very weak which should yield a big correction, and that the reason the CNN Fear/Greed Index is so low is because there is a lot of fear that there could be a correction and people will be more inclined to sell stocks.
Time will tell, but I think that the market will end the year close to the highs, unless there will be a black swan event.