It was just this past spring when LNKD (LinkedIn Corp) had it's IPO, and soared over 100% from it's offering price of $45s. It was a spectacular day, and LNKD(LinkedIn Corp) enjoyed a few weeks of volatile trade above and below the $100 mark. Of course there were many skeptics, who thought LNKD(LinkedIn Corp) current fundamentals didnt warrant the lofty share price. Actually, I think there was a line forming for those waiting to borrow shares to short. Over the course of the next few months, LNKD (LinkedIN Corp) continued to trade in a wide range, from $60 to $100. The issue with LNKD(LinkedIn Corp) was with it's valuation, as the company only generated $93 million in revenue as per it's initial filing, but had a market cap in the Billions. Couple that with the secondary offering of 8.75 million shares in November, and you have a stock poised for a sell-off... which it did. As with any stock that has seen it's share price fall, many LNKD(LinkedIn Corp) shares were in the hands of short sellers. Which brings us to last week.

LNKD(LinkedIn Corp) reporting earnings that easily surpassed analysts estimates. It turns out the secondary offering that is usually a red flag, was actually a good thing. The company is growing so fast, they need money to continue the growth.

The same company that analysts said was a bloated stock with weak fundamentals. The same stock that Analysts continued to give lower price targets even as the stock soared to new highs. As with many sectors and companies, there are always parallels that can be made. And one thing for sure, is we think there will be many parallels made between CRM and LNKD in the coming months. And you heard it here first at OptionMillionaires.

We fully expect LNKD(LinkedIn Corp) to trade above $100 in the very near term. 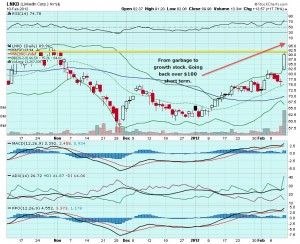