In early October of 2012, less than three months ago, Independent oil and gas company Linn Energy Llc ($LINE) spun off LinnCo LLC ($LNCO). The IPO priced at $36.50 a share. The spin off raised over $1 billion for $LINE and also gave investors, who were unable to invest in $LINE, the chance to do so via $LNCO. Those who weren't able to invest in $LINE have missed out on a massive rally since the stock bottomed at $8.14 in late 2008 and likely see more appreciation coming, which they can theoretically trade for via $LNCO.

After the October spin off, $LINE went on to score a new all-time high of $42.39. However since hitting that price the stock has dropped almost 15%. $LNCO on the other hand has traded in a nice range with the stock currently 3%+ higher than its IPO price. Both stocks offer great dividend yields of over 7%, which in this current ZERO interest rate environmental, makes them both excellent investments. Cramer loves them, Wells Fargo, Robert W. Baird, UBS all have buy and outperform ratings on $LNCO, it seems almost impossible to think that $LNCO and $LINE will fall from here, which brings us today's very odd option activity.

The AUGUST $35 puts have seen a handful of trades since the IPO, yet today that option traded close to 20,000 contracts with the bulk of the volume coming in one GIANT block trade. If $LNCO was a penny stock you could be sure the press release was all set to be issued before the open tomorrow. "$LNCO finds $5 billion worth of silver dollars buried in company headquarters basement". Of course $LNCO is not a penny stock and the trade wasn't a bet for the stock to appreciate in value, rather it was a large out of the money option bet for the stock to decline. Four minutes after the option trade hit the tape we had a spike in the stock as over 400k shares traded hands, likely to cover some, roughly 25%, but not all, of that large option trade. To cover the full 18,741 option trade you would need to possess over $70 million in $LNCO stock - over 1.8 million shares.

This certainly is an interesting trade, but maybe its nothing. Maybe it was a fat finger, bad data, or some crazy billionaire with nothing better to do than buy millions of dollars worth of contracts in a stock that has a mostly dead option market to pique my interest. If so, my interest has been piqued, and if you are as cynical as I am you might want to watch $LNCO and $LINE in 2013. Just think for a minute if you had $4 million to spend on one option I'm sure wouldn't be putting it into $LNCO unless you knew something. It makes you wonder.........

If we see a rapid decline in either stock over the coming months you need to look no further than today's option trade as the first clue that something was rotting.

Below are two charts, the first is the AUG $35 put chart showing the massive block. Look at it compared to the rest of the option activity. The next is the volume spike today after the option trade as the seller likely bought the stock to cover whatever shares that were not already owned. Whoever sold those contracts likely has all 18,741 of them covered by owning the stock. The buyer of the puts, on the other hand, could lose all $4.7 million of that HIGH RISK out of the money leap if $LNCO does not drop over 15% by August. 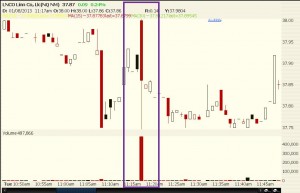 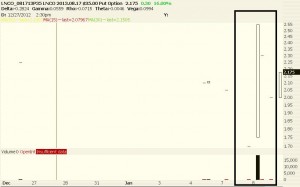