$LINE and $LNCO were stock market darlings earlier this year, beloved by analysts and financial media alike.  The stocks appeared impervious to downside until earlier this week when the company announced an SEC investigation.  Both stocks fell dramatically, and while surprising to most, some very odd, unusual, strange, and uncanny option trades piqued my interest many months ago that a sharp decline was coming heading into the summer.  I pointed this trade out numerous times to members of the chat room and live webinars and stated that I thought the chance for a big decline in either stock was likely.  It's been a very profitable ride for the shorts and put buyers.

At the start of the year, while everyone else was busy calculating  just how much money the FED was going to print, I watched an almost $5 million out of the money option trade take place on a stock that had, historically, almost ZERO option volume.  The size of the trade is on par with something you would see for an $AAPL or $SPY option, not $LNCO.  It was beyond unusual.  I could understand the one side of the trade, but the other side of the trade, buying almost $5 million in out of the money puts, it just seemed like either someone had millions of dollars burning a hole in their pocket, or they had information the rest of us weren't privy to.

I wrote about it here: https://www.optionmillionaires.com/2013/lnco-sees-massive-multi-million-dollar-option-bet-on-downside/

This is a quote from my article about $LNCO and $LINN from January 2013:

This certainly is an interesting trade, but maybe its nothing. Maybe it was a fat finger, bad data, or some crazy billionaire with nothing better to do than buy millions of dollars worth of contracts in a stock that has a mostly dead option market to pique my interest. If so, my interest has been piqued, and if you are as cynical as I am you might want to watch $LNCO and $LINE in 2013. Just think for a minute if you had $4 million to spend on one option I’m sure wouldn’t be putting it into $LNCO unless you knew something. It makes you wonder………If we see a rapid decline in either stock over the coming months you need to look no further than today’s option trade as the first clue that something was rotting.

As it stands today that option trade, on paper turned an almost $16 million profit.

What was the logic behind the trade?  Would you spend $5 million on far out of the money puts that could expire worthless?  What kind of information did the person behind these trades have before they executed them?

I will cover these questions and more later tonight.

Have A Happy 4th Of July 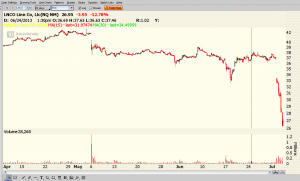