LinkedIn(LNKD) going to $150 short term? Who in their right mind would think a stock most think is insanely overvalued at $103, will move another 50% in the next few months? Well we do. We wrote about LinkedIn(LNKD) after earnings(HERE) and last week after it broke out like we said it would above $100(HERE) .

Its only when folks start believing something can happen is when it starts. Take a look at Priceline.com(PCLN) chart below. Everyone and his brother was calling the top on PCLN since it went mid $550s in the spring of 2011. It's only when everyone started believing, that it found its legs into the stratosphere. (and yes we called it at $445) 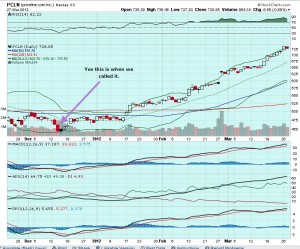 Dilution from a secondary offering? Lock-up shares hitting the market? Multi-billion market cap for a company doing a few  hundred million in revs? These are exactly the reasons you see asshole analysts posting $60 PT on the issue. Tune out the noise, and focus on the trade. We will have more on LinkedIN(LNKD) this weekend. For now, just remember who told you its going to $150+ by the summer.