How many headlines do we see about imminent stock market calamity?   I have provided a few below, and note that these are from over 3 years ago!  A very small sampling of the almost daily fear mongering we've seen since this bull market started in March 2009:

"3 Reasons Why This Market is Going To Crash"

" 6 signals that say a new depression is coming."

" Why you should be preparing for the next financial crisis?"

Exactly Three years ago today Marketwatch had no fewer than 3 headlines calling a market top: 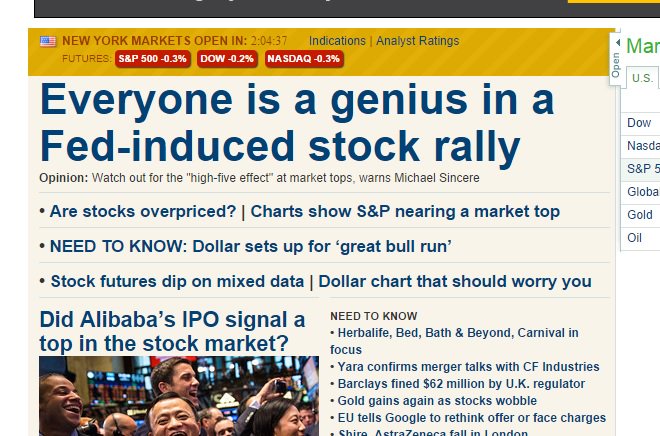 Today Marketwatch is back at it, calling this market a bubble....

and its not just Marketwatch.  Widely followed pundits have been calling a top for years.  Doug Kass, who sports an unknown amount of twitter followers (he has long since blocked me) was calling a top for the market 3 years ago.  And dubbed it the Ali-Blah Blah Top.    and heading into this year he's still at it trying to get that proverbial horse manure to stick to the wall.  His trade of 2017 was to short the $QQQ.   Despite a market at record highs, there remains a constant negative perspective and  countless  headlines on why you should sell all your holdings.....

..... but  approximately 4,195 reasons why this market is likely to continue higher.   It's all about the dips.

The dips continue to get bought in this market.   Case in point the action this week.    Even with the FED reducing its balance sheet by $10 billion a month, or roughly what $AAPL's share buyback program spends each week buying back stock, the post FED dip was swiftly bought.   It was the 4,195th time since the March 2009 lows that the  dip was bought.

S&P500 futures couldn't even muster a .4% decline before the dip buyers took control.

The S&P500 ended up closing even on the session.  #missionaccomplished

Buy the dip or, as most refer to it with the addition of a vulgar adjective,  BTFD  has grown over the years, and  as prices have  inflated -  it now  includes BTATH.  Which means  Buy the All Time Highs.  BTFD and BTATH both contain one key term... BUY.    And despite all the warnings, fear mongering, negative headlines, natural disasters, top calls,  terrorism....   BUY has been what has worked since the lows in 2009, yet here we are with another weekend chock full of reasons why you should sell.....

You have to love the image that came with their latest bubble article: 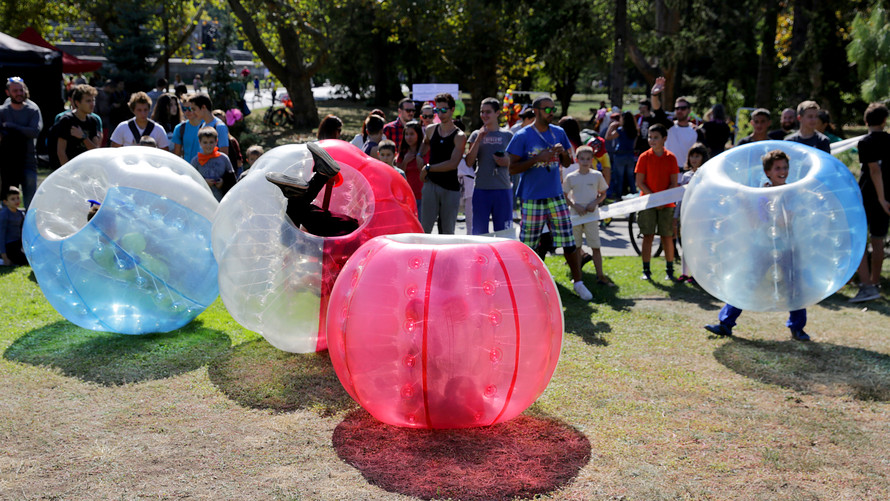 For the record, rolling around in those balls is pretty fun... and you know what!  We deserve it!!   The 100% guaranteed market crash of 2016 was going to send the world into another great depression.  Lucky for us it never came to fruition.  Why not celebrate by rolling around in some giant inflated balls.  Who knows when we need to start counting down for the next '100% certain market crash'.

I've written sarcastically about the Market Crash obsession for quite a while.  Clearly stock market crash brings in a lot more revenue than  boring steady upside.

Crash headlined with a pensive or worried FED official, and presto.. clicks.. swipes...

The market remains on an upward trajectory.  The VIX remains low.  Pessimism still abounds.  And yes the negative headlines and habitual top calling has not gone away, and likely never will.  Dips are still getting bought hand over fist all these years later.  Until that changes, there is a lot more upside for this market.

DOW 1,000,000?    According to Buffet we have to wait another 100 years.... so probably not in our lifetime.  It seems like a high number, but who are you going to believe?  The constant negative headlines and pundits?   Or Warren Buffet?

While the headlines continue to provide all those  reasons to sell, the bulls have over 4,195 and counting reasons to buy.  And that number is  going up seemingly every day.