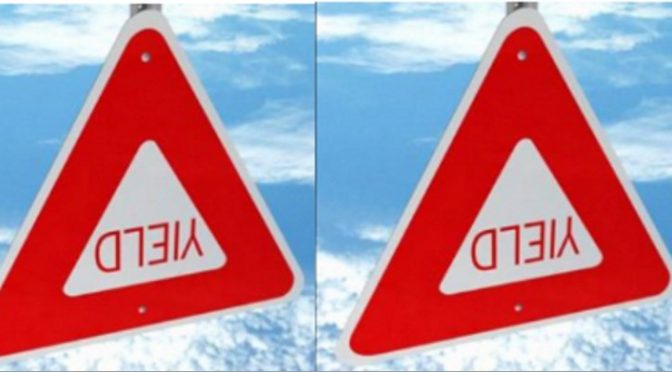 The Yield Curve Inverted last week which virtually assures that a recession is on the horizon. However,  just like our untimely end on this earth is on the horizon, the timing is vitally important.

I've mused previously over the years that the next recession might actually involve higher stock prices!  How crazy is that?  Not any more crazy than our government buying it's own bonds from itself with money made out of thin air.  And then remitting interest payments to itself from those bonds bought with that freshly fabricated money.  Or Central Banks buying junk bonds and ETF's.  Manipulating their currencies.  Central Bank spouses front running these currency manipulations.  Need I go on?

The Central Banks get blamed for both the good and the bad.  You can even blame this most recent Yield Curve Inversion on the FED.  Raising short term rates amid a weaker economic backdrop?  What were they thinking?  Of course had they held off, the slightest uptick in inflation would have everyone wondering  why the FED wasn't raising rates earlier. What were they thinking?

Which of course begs to question what the heck everyone was thinking the last time the Yield Curve Inverted some 12+ years ago.

Let's start with 2006.  When the Yield Curve inverted January 2006 the FED was in an oddly  similar spot as they were this past week when they put the brakes on rate hikes ---->>

What were they saying back then?

The Yield curve inverted at the start of 2016.  And despite talk of the contrary, the economy did enter a recession less than two years later.  The stock market rallied another 20% from the initial Yield Curve Inversion and then fell almost 50% from there when the Great Recession hit.

For what its worth, when the yield curve inverted in 2000 the market had already topped, however it did not begin to fall in a meaningful way until some 6 months later, with the recession officially beginning just less 11 months after the Yield Curve Inversion.

Here we are in 2019, and after some 12 years of lying dormant... the inverted yield curve is back.

Clearly its a big deal. Although you wouldn't know that if you went over to Marketwatch this morning:

First time Yield Curve has inverted in 12+ years and Marketwatch comes across like Politicswatch this morning.... fingers crossed ESPN does not start covering politics too - I'd almost rather see those 'Market going to crash 40% tomorrow" headlines than this crap pic.twitter.com/2oZsl8FXqp

Seemingly, unlike from what many were saying in 2006, this most recent yield curve inversion is pointing to a recession in around the next 8 to 24 months.

The yield curve is inverted again. Why does this matter? The last 9 recessions recessions in the US were all preceded by an inverted yield curve (1-yr yield > 10-yr yield). If history repeats, we could see a recession begin w/in the next 8-24 months (avg lead time = 14 months). pic.twitter.com/fOAnYz6xGQ

Perhaps it is different this time?  Or are the bears finally going to get this one right?

I covered some of my thought process   here.

And don't get me wrong.  Growth is already slowing.  The Trade war and tariffs aren't helping the cause.  The last jobs report was on the brink of a negative print.

And you know what I think about that.

However the economy does not always equal the stock market.  The Central Banks opened the Pandora's Box during the last "Great Recession" in 2007/2008.  That is what is different this time around.  And I'll leave it at that for now.