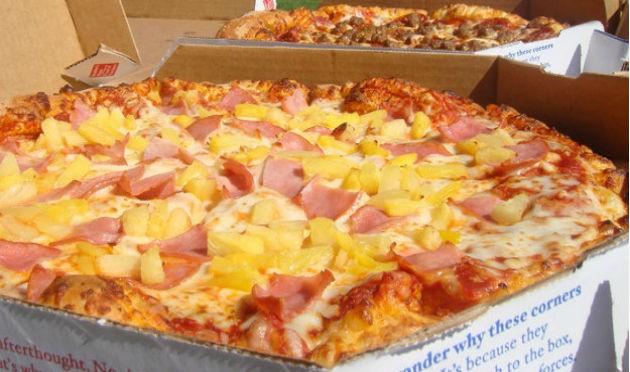 The  Central Banks and their zero percent interest rate policies, whether you care to admit it or not, have clearly distorted the market....... in a good way and/or a bad way.   It all depends on your perspective.   It's been distorted in a good way if you are long the stock market, and a bad way if you've been shorting this market all these years. It's been distorted in both a  good and bad way if you like seeing the stock market at record highs, but  realize 9 years of low interest rates is going to make the next bust that much more 'bustier'.  And its been distorted in both 'a bad and a bad way' if you've been short this market the last 8 years and realize the bust of this cycle is going to be worse than being forced to watch 24 hours straight of Alf Re-runs.  Then again Alf hasn't aired a new episode in over 20 years, so lets just say 24 hours of Alf, and assume, barring Netflix starting back up the series, that any Alf episode  you are forced to watch is in fact a re-run, without actually having to say re-run.

Speaking of re-runs.  Did you read Howard Marks this past week?

It's a longer than his usual memo's but well worth the time.  And if you have been looking through the current investment environment with rose colored glasses on, please take them off while you read.  It's an eye opener, and also casts light on what's going on here and now.

For me the most telling was a 100 year bond sale by a country that has defaulted numerous times within the last 100 years.  The market cares more about today and now and a lot less about yesterday and 20 years from now.

Is History Repeating Itself?

Are we back to where we were in 2007 and 2000?  The Central banks are being thanked for bringing the global economy back from the brink of complete Armageddon in 2008.   There was a lot of skepticism during the Financial Crisis,  that they were doing the right thing.  It always seems like the right move keeping that baby from crying.   Keep that baby happy and dry.  Pat it on the back.  Burp it.  Love it.  And most importantly Feed that baby!

In 2008 the markets were crying loud.  Sobbing.  In hysterics. Having fits.  But Ben Bernanke and the FED took that binky, that pacifier and shut that baby up.   Thank goodness.  #2 on my most annoying sound list, right under chalkboard scratching (does anyone even know what a chalkboard is anymore)  is baby crying.  I can't stand it.

But when that same baby is 10 years old and you are still giving it that pacifier when it cries...  it's not the right thing anymore.  Yet here the FED is, still with pacifier in hand.  And when that baby stopped crying  Ben Bernancke  jammed a bottomless bottle of cheap money into that baby's mouth.   But we should be thankful.... right?

We should be thanking the Central Banks.  Had the FED and every other Central Bank this side of the Delta Quadrant NOT resorted to their untested, untried, and unprecedented monetary policies, who the heck knows if you would still be able to watch each and every step of  the fabrication process for your $5.99 medium two topping pizza, while showering to the latest Taylor Swift song.  Man could you imagine life without that?

We live in a perfect world right now.   It's a veritable nirvana, a utopia, for corporation like Dominos.  Low costs, low interest rates, debt hungry investors.  Central banks buying corporate bonds, of any and all variety.

So what's so wrong with the world right now?  Why its those same   Low costs, low interest rates, debt hungry investors and Central Banks buying corporate bonds of any and all variety.

The right feels so good right now.   Right?   Stocks are at record highs.  Consumers are 'happy'.  Unemployment is at decade lows.   401ks are fatter than they've ever been.  Housing prices have come back.    People are buying pizza with one tap on their smart phones, and watching it get put together step by step.    They know exactly when that pizza is going to arrive.   Technology is amazing.

Nothing feels wrong.... right?  How about 8+ years of low interest rates.  Money for nothing?   How long can debt continue to mount without having to get paid?  Forever?

Funny I should ask that question.

I think that is precisely what Domino's Pizza Investors should be asking themselves.   If Domino's Pizza is not on the front cover of the 2009-2017 Bull Market Recap, it will most assuredly be one the leading stories.

But unlike it's Pizza brethren, such as $PZZA Papa Johns, $DPZ continues to operate like a real estate property in 2005-2007.  How so?

If you recall leading into the housing crisis that ultimately created the 2008/2009 financial crisis, homeowners were using their inflated home values as ATM machines.  They would refinance their homes at the freshly inflated number and take the excess money out via a 'home equity loan'.   We all know how that ended.

All that excess home equity was  artificial.  Yes it felt real at the time.  And yes those homeowners, well they weren't really homeowners either the banks techincially owned the homes....  lets call them people who were able  to breathe, which is just about all it took to get a loan those days.   Yes.. the air breathers who were living in the banks home, used the banks home as a means of income.  If the house value went up $20k, they refinanced and took that $20k out.  Again we all know how this story ended.  Ironically the banks, at least most of them, ended up doing pretty well.  Amazing how that works, seeing as they were the ones taking all the risk.  And perhaps that's why the VIX is closer to zero every day.  If the FED has taken the risk out of the market, and the banks will never fail... there is no risk.... right?  Ok... I veered off a little....  if somehow I lost you here is the point I am trying to make.

Just look at Dominos.  I covered $DPZ in more detail back in March.

At that time I stated that Dominos was going to announce another recapitalization.  Now folks.... lets just call a recapitalization a refinance.  Because that's what it really is.   Domino's is like thatnhomeowner  in 2006 tapping the value of the house.

Sure enough, just on schedule,  this month Dominos announced another 'recapitalization'......   I nailed it!    Of course it wasn't too hard to spot the pattern.  They went 5 years between refinance's, then 3 years, the next would be 2 years, which put us at 2017.

The question now is, will Domino's recapitalize again in 2018?  And if they do, will they start doing it on a bi-annual basis?  And why is a company that boasts of such success and growth piling on the debt to fund shareholder reimbursements, instead of paying down its debt?  The latest refinance for Domino's has them increasing their debt load by almost 50%. 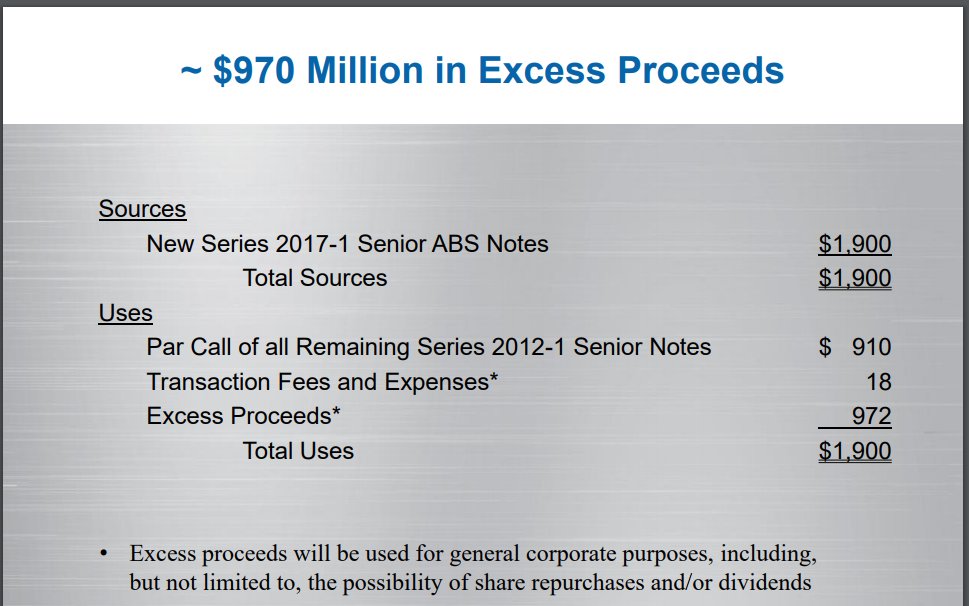 The definition of excess:

an amount of something that is more than necessary, permitted, or desirable.

More than necessary, permitted, or desirable.  I am sure the executives won't mind throwing it at the shareholders again.  In 2015 they threw $600 million at buying back the stock.  The stock was trading at a 50% discount to today's prices.  Any buyback the company does with their 'excess' proceeds will have 50% less bang for the borrowed buck than it did in 2015.

A special dividend perhaps? There is just so much you can do with ~$1 billion in excess capital.

It makes me chuckle....  $970 million in 'excess proceeds'  .... Like they have  nearly $1 billion of 'excess' money lying around that they don't know what to do with.  Clearly only a quick service pizza company can have that type of problem.

Let's also remember that its costing them nearly $20 million in transaction fee's  just to get these 'excess proceeds'.  But then again, when you can tap the markets for $1 billion, whats $20 million?  ... really.

Where in 2005, 2006, 2007 homeowners refinanced their houses to buy fancy cars, electronics, and go on lavish vacations, in 2007, 2012, 2015, and 2017  Dominos refinanced their debt and in  most cases used their 'excess proceeds', sometimes up to $1 billion, to issue dividends and buyback their own stock.  Both of those actions are essentially taking the money and putting in the executives pockets without literally taking the money and putting it in the executives pockets.  Of course shareholders pockets get lined too.  And that is every much a reason why $DPZ pizza has gone up 1,000%'s  of percent the last 8 year.

Factor in cheap labor cost, cheap commodity prices, along with the cheap debt, and Domino's operates in a Pizza corporation nirvanna.

Domino's has avoided thus far having to pay down any of their debt.  Why should they?  Interest rates remain low.  When a country with a history of defaults can issue a 100 year bond with strong demand, who wouldn't be a buyer of Dominos bonds.  And on the flip side, why wouldn't Domino's tap the markets to augment their share value through 'excess proceeds'?

In a perfect world Domino's may never have to pay their growing debt load off.   It was $2 billion to start the year, now Domino's owes over $3 billion.  They pushed back the balloon payments on their debt from 2018 to 2022.  And I have no doubt they will do it again and again and again.  Take out that $1 billion, issue dividends, buyback stock, roll over debt, refinance.  Thank you Central Banks.

and while your at it .... I'll take one medium pie with pepperoni  and ~$1 billion of Excess Proceeds to go please,  and hold  the principal payments please.