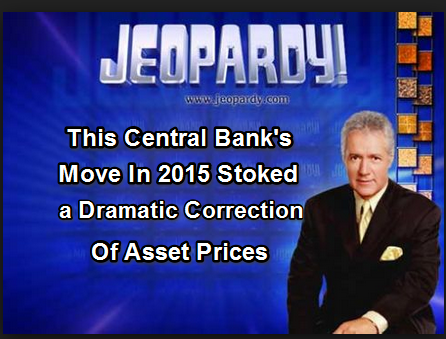 In our lifetime there has never been a day like today.  Years from now when a currency moves 300 pips (which used to be a big move) traders will be like "remember when the Franc moved over 2,000 pips in just a few hours back in 2015?".  Its truly a historic day, and not for good reasons... at least as far as I am concerned.

The Swiss decided to wave the white flag today and end years of artificial price fixing of their currency.  For us mere mortals manipulating the price of something would likely land us in jail, for a central bank its just another day of lining their pockets.  Heck three years ago the head of the Swiss Bank's wife was front running all the currency manipulation.    Today's massive move, historic move, once in a lifetime move.... what are the odds some Swiss Bankers wife wasn't front running it?

2,000 pips.  That is a number you see over the course of years, and even that stretched out over years, is a strong move.  Picture the $SPY one trading session dropping $30 one day in an instant for no reason.  Or the DJIA falling 4,000 points in a flash.  For anyone who hasn't traded currencies, or hasn't a clue about them, this move is beyond big.  It's beyond mind boggling.  And to me it epitomizes all that is wrong about the Central Banks today.

Today's Swiss Franc move basically shows what happens when a Central Bank throws in the towel.  After almost four years the SNB said.... 'that's it we will no longer manipulate our currency to stay at the 1.2 level with the Euro.'  What happened next was historic.

What's almost more surprising is that after an initial tumble, stocks traded higher on this news.  Finally later in the session investors started to come to their senses.

2,000 PIPS.   It still is tough to comprehend.  Again picture the DOW moving 4,000 points and the media just giving it a cursory summary.  Today's Swiss Franc move is a lot bigger than what they will tell you on the news.  It's the start of Central Banks throwing in the towel.  For once they are letting the free markets pick the prices.... and if today's action is any indication, we are in for a world of hurt.

4 thoughts on “I’ll Take The Best Way To Wreck The Global Economy for 2,000 PIPS Alex”