I'm not going to make a big deal about it, however leading with it is kind of making it a deal, so I will just say it.  The streak is over.  Today the Dow Jones Industrial Average ended its 8 session losing streak.  The basket of 30 stocks still makes the headlines.  However amid this 8 session 'collapse' small caps and the Nasdaq were busy rallying to new all time highs while the S&P500 was in consolidation mode.

The last big ugly streak for the market came heading into the election in November 2016.  Stocks have done pretty well since then.  Of course I am not implying we open up 1%+ on Monday, which is what happened when that streak broke.  I am also not suggesting the S&P500 futures will be limit down during the following overnight session..... remember that?  The initial reaction to Trump winning the election was a frenzied sell off that saw a halt of  S&P500 futures

That turned out to be a tremendous dip buying opportunity.  And this most recent 8  consecutive session DJIA pull back may turn into a spring board for higher prices as well.

The Dow is down 8 days in a row. Here are all the longest Dow losing streaks ever back to 1896.

The good news? Returns after these streaks end are quite strong. Especially when it happens above the 200-day MA (like this streak).https://t.co/TaQaD6iC93 pic.twitter.com/3PBge1G64q

And let's face it, history does have a habit of repeating itself.   Especially when the historical event involves a dip in prices. Every single time since the lows in 2009, the dip gets bought.   Just look at the price action after the recent negative news events.  China Tariffs, Italy, China Tariffs again.   Negative for a bit, positive for a lot longer.  It remains a tough market to have a bearish perspective of for more than a day.

While the DJIA streak ending portends possible upside potential, the Nasdaq and small caps have started little streaks of their own.

After hitting new record highs both $IWM and $QQQ have seen some profit taking.  On a longer term time frame both are seeing their recent positive momentum wane. Two down days certainly is not a trend, but it bears watching.

I think the short term outlook for tech and small caps is negative.  We could be setting up for a move lower over the short term.    And we've seen it happen in previous June months, where the Nasdaq sells off sharply while the S&P500 and Dow remain strong, even positive.    More or less a rotation out of tech and back into some of those beaten down Blue Chips like $JNJ, $CAT, and $JPM.

However over the medium term, into the middle of the summer and start of fall, we could see prices rally even further, with all the boats getting lifted higher.

Heading into this week I'm looking to trade some of the beaten down Dow Components for upside, namely $JPM on a support hold. 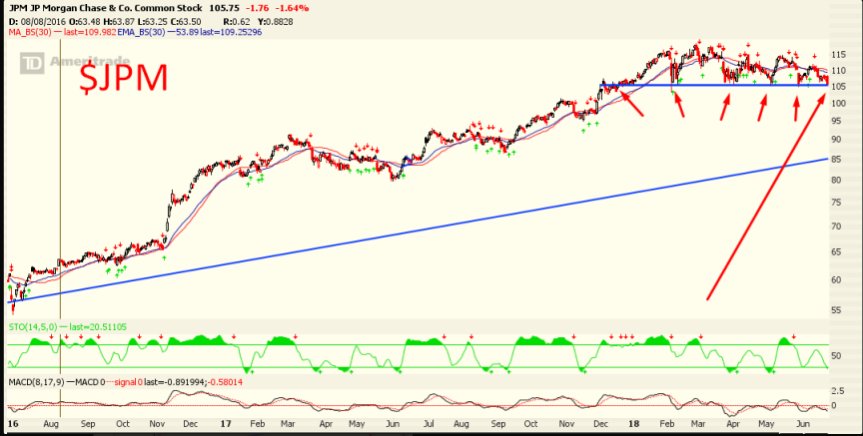 $GME has got that long term upside set-up going on.  We've seen some ugly brick and mortar get all prettied up this year.

I'm not saying $GME pulls a Fossilesque 400% move this year, or 40%.  However I do like the odds it sees $20 or better again over the coming months... and that is without any additional buyout chatter.

I think the bottom is in, and the stock has turned the corner.

and of course it doesn't hurt when the bears have bet on more downside by borrowing over 43% of the existing float and selling it.  As $GME grinds higher we could see those shorts whose selling exacerbated the downside move, start covering which could augment the price recovery.

That is all for now.

Is This Market Headed Higher?