We wrote last year how the Solar stocks were going to become the shipping stocks of 2008 - 2009.  It looks like we are going to be right again.  FSLR today hit another all time low.  The stock is dropping like a stone, but I see a few short covering rallies before the stock ultimately goes into the penny stock range.  FSLR, for the remainder of 2012, will trade like a fish out of water, flopping around and gasping for air.  The shorts have taken this fish out of its tank.  Over 44% of the stock is shorted, just a crazy number, and this will lead to wild short squeezes, perhaps fueled by unsubstantiated rumors.

How do we trade for these impending pumps?  Buy out of the money call options.  I like to dabble the 10-15% higher strikes and currently hold both the $22 and $23 weekly calls.  If we get a 10-15% short squeeze those calls will pay off handsomely.  If we don't I will just roll over to next week.

Look at the chart for FSLR since it first went public in 2006.  Looks like a fabulously orchestrated pump and dump. 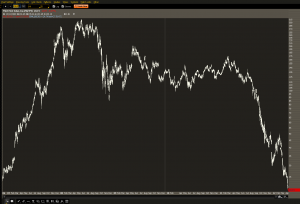 The Waltons (yes Wal-Mart owners) have been selling FSLR stock hand over fist, as has the current CEO, with most sales in the mid to upper $100's.  Must be nice to own a boat load of shares and sell them while everyone else is buying.