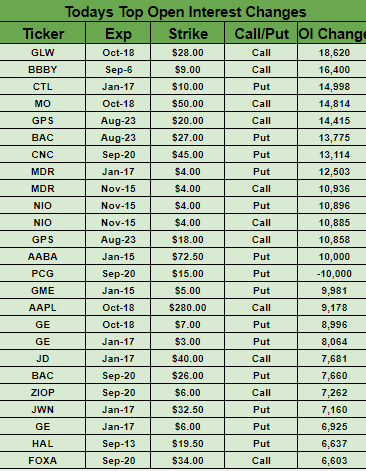 The annual Jackson Hole symposium is in the spotlight again today. While the gathering in the Grand Tetons typically gravitates toward academic discussions on policy, this year's meeting has heightened political, trade and rate considerations swirling around it. Federal Reserve Chairman Jerome Powell will make his first public remarks since the Fed cut interest rates for the first time in over a decade. The stakes are high for Powell with disagreement within the Fed over the strength of the U.S. economy and the pace of rate cuts.

World leaders will start arriving in Biarritz, France today for the G7 summit scheduled for August 24-26. The summit takes place amid growing concerns of a global economic slowdown and an escalation of the U.S.-China trade war. Expectations are running low that any sort of official coordinated statement will be issued from the event, although some of the one-on-one meetings could be dramatic. The meeting marks a changing of the guards of sorts. German Chancellor Angela Merkel has lost influence ahead of her departure, while Italy just saw its prime minister resign. Boris Johnson will rep Britain amid the Brexit turmoil, and Donald Trump strolls in looking for allies in the fight against China's trade practices.

Tesla (NASDAQ:TSLA) plans to buy batteries from South Korea's LG Chem Ltd. (OTCPK:LGCLF) for the electric vehicles it manufactures at its Shanghai plant, sources told Bloomberg. The LG Chem batteries are expected to be used initially in Model 3 cars. Shares of Tesla are up 0.83% in premarket trading to $224.00, while LG Chem rose 2.97% earlier in Seoul trading.

Disney's (NYSE:DIS) high-profile D23 media event begins today. Studios will be front and center, as Disney, Pixar, Lucasfilm, and Marvel all have an extensive film slate that could be previewed in detail. New content plays from Disney+, ESPN+ and Hulu are expected to be discussed and the next trailer for Star Wars: Episode 9 is likely to be unveiled. There could also be some theme park news from the company on the integration of Marvel attractions and the East Coast launch of Star Wars: Galaxy's Edge at Disney's Hollywood Studios.
Go deeper: See a breakdown of Disney's profitability grade.

Consumer prices in Japan rose 0.6% in July compared to a year ago to match the expectation of analysts. The low rate is another miss by the Bank of Japan in hitting its 2% inflation target rate. Economists expect consumer price inflation to slow even more in the months ahead due to low oil prices and government support for pre-school education costs. The tepid pace of inflation adds to the speculation that the Bank of Japan will fire off stimulus as early as next month.
Go deeper: Check out the performance of the iShares MSCI Japan ETF.

YouTube (GOOG, GOOGL) became the latest social media company to disable content related to the Hong Kong protests, disabling 210 video channels linked to coordinated disinformation. The company say it found the use of virtual private networks and other hallmarks of accounts trying to hide their origin. The move follows similar China-related actions by Twitter (NYSE:TWTR) and Facebook (NASDAQ:FB) this week.

Hasbro (NASDAQ:HAS) struck a deal to acquire Entertainment One (OTCPK:ENTMF) in an all-cash transaction valued at approximately $4.0B. The company said the acquisition of eOne adds story-led global family brands that deliver strong operating returns to its portfolio and provides a pipeline of new brand creation. Hasbro expects to realize in-sourcing and other global annual run rate synergies of ~$130M per year by 2022.
Go deeper: READ THE LATEST OPINION ARTICLES ON HASBRO.

Negotiators for Japan and the United States fell short of a bilateral trade deal after marathon talks, but the two countries will extend the talks Friday. That's in hopes of bringing more concrete issues to the big table when U.S. President Trump and Japanese Prime Minister Shinzo Abe gather on the sidelines of the Group of Seven summit this weekend in France. Gaps remain between the two on automobiles and agriculture.

Boeing (NYSE:BA) told suppliers it will resume production of its best-selling 737 jets at a rate of 52 per month by February 2020 and step up to a record 57 per month in June. Suppliers were told that the new schedule depends upon regulators approving the 737 MAX to fly again commercially in Q4. Rate changes by major manufacturers are usually incremental and communicated months or even years in advance, but the unprecedented challenge to the 737 program is said to have forced Boeing to scramble.

Overstock.com (NASDAQ:OSTK) rallied after CEO Patrick Byrne stepped down from his position and severed ties with the company. Earlier this month, shares of Overstock.com fell sharply when Byrne referred to federal agents as the "Men in Black" and detailed his involvement with investigations related to the Clintons and Russian election interference.
Go deeper: See how the Quant rating on Overstock.com stacks up.

A new CEO is coming on at HP (NYSE:HPQ).