DMDN (Diamond Foods, inc) has been a very volatile stock over the past 12 months, trading as low as $26 and as high as $96. Its agreement with The Procter & Gamble Company (NYSE:PG ) to merge the Pringles business ("Pringles") into Diamond Foods in a transaction valued at$2.35 billion has been the catalyst for the extreme highs and lows.  The stock pushed to all-time highs after the news, as the merger would triple  the size of  Diamonds snack business model. 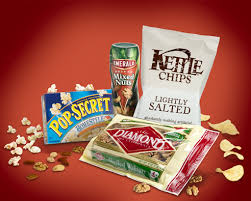 Some more benefits from the filing:

Of course nothing is ever easy or certain, and rumors of possible missteps in regards to payments to suppliers that may have inflated DMND's results surfaced. It looks like the deal to merge in Pringles is on hold until it's latest financials are released ,which were postponed from December. Here is the companies explanation: (click here).
The good news is, P&G is still assuming the sale of Pringles will happen this year, and that is a good sign for shareholders of DMND.
Heck, what is there not to like about a company holding one of our favorite popcorn brands, Pop-Secret, and one of favorite chip brands, Pringles.
Expect some type of update out in the next 2 weeks, and a volatile trade after the news. We bought some calls, and will be looking to add to our position this week.