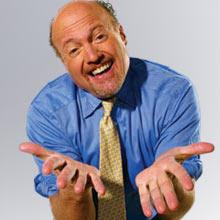 On October 6th 2008 Cramer panicked (or executed a perfectly timed strategy)  .  Like George Costanza in a now immortal Sienfeld episode, Jim Cramer ran out of that burning apartment and left every woman and child behind.  It seems the only thing he didn't knock over on his way out of that inferno was his ego.

On October 6th 2008 Jim Cramer told everyone to sell it all.  Get out of the stock market....  And get out of the stock market everyone did.  It was a panic and we didn't hit the bottom until March of 2009.    Had you ignored Cramer and held, you would have saved yourself much more than the commissions you would have incurred from liquidating your life savings.  You'd be up significantly on your investment in almost every stock.

Business and stock market shows are great for entertainment value.... and Jim Cramer is surely entertaining...  but he couldn't have been more wrong in 2008, or perhaps it was his intention all along.  For a man considered to be very smart, why would he want everyone selling at historically low prices?

Here is the Cramer Video telling everyone to sell sell sell everything on Oct 6th 2008!

I have circled in yellow the point at which CRamer said to sell everything and stay out of the market for the next five years.  The charts speak for themselves.  Had you wanted buy every stock in the S&P 500 at a cheap price you could not have timed this sell call more perfectly.  Cramer you might not be as dumb as you look after all.