For the last few weeks the market has been range bound with a slight negative bias. We are currently sitting in-between the 50dma and the 100dma, but more importantly we are only $7 above the 200dma. With the VIX at 20, I believe that we are heading for a breakdown, probably on the heels of either inaction on the part of central banks, a further breakdown in oil, or weak earnings. There are a few technical signs that point to a bigger breakdown. First of which is a head and shoulders pattern. 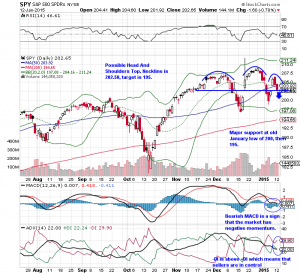 The next sign is the continued inability for the SPY to hold 204 (50dma). Today seemed like the perfect chance for the bulls to take control. A big gap higher, followed by a continuation in the first 60 min to take the market higher by 1.5%. The problem with this was that sellers showed up mid-morning, and then the market just slowly fell out of bed. What this tells you is that the buying this morning was either short covering, or just speculative short-term bets. When the market takes a little turn for the worst, everyone runs for the hills. The main reasons the market fell today was because of bearish news out of the homebuilder KBH (sales were weak) and that Germany was hesitant to approve an ECB QE program. I believe that the German headline was much more significant because if indeed the ECB does not do QE, I think European markets, and in turn global markets will fall dramatically. As the market was falling it was breaking all support levels. It had gap support at 203.50 (where it started the day), then it hit and failed to hold support at 202.50 (yesterdays close) and failed. The market ended up finding support at 200.50 but I suspect the reason the market held was because the market makers did not want the SPY to get that close to the 200 level (where I think SPY pins Friday and in turn have a 197/200/203 put fly). The bounce into the close will not mean much for tomorrow. If we open higher I would short it, if we open lower I would short it. I feel that with every rally constantly being sold, the best trade is to play for downside, especially on an OPEX week where a pin of 200 seems quite possible.

I believe that the market is on a verge of a breakdown, possibly testing 195. In addition to the head and shoulders there is also a wedge pattern on the SPY. This tells me that the SPY is coiling up for a big move (up/down). I think the market needs a catalyst to go higher, otherwise it will breakdown. This sounds different from the last few years, but right now sellers seem to be in control. You would want to see a gap above or below either the upper or lower wedge trendline to know for sure which way we are going. I think it is smart to buy Feb calls/puts now so that you can be in ahead of the move. 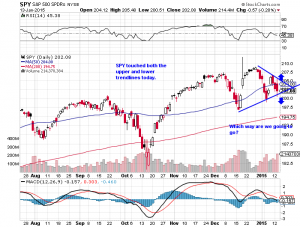