We have written about AutoZone, Inc.(AZO) many times over the past year. This is a stock that has moved consistently to the upside since hitting $84 in late 2008. The stock price has been buoyed by great earnings and a strong buyback program. Last week Advanced Auto Parts (AAP) gave some weak guidance which shook the auto parts sector. AutoZone, Inc (AZO) took it on the chin falling nearly 6% last thursday to close at $365.58. Folks were fearing a slowdown and worried there would be some effects on AutoZone, inc (AZO) earnings.  They were wrong as AutoZone, Inc (AZO) reported earnings this morning that missed slightly on the revenue side, but beat everywhere else. Traders were skittish and took the stock down 4% pre-market only to watch it trade into the green late this morning. 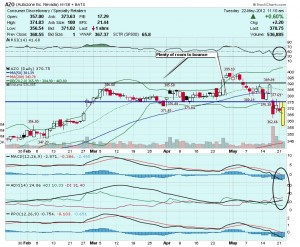