This  week before the Super Bowl is choc-full of earnings, headlines and events.  It was around this time last year when the selling began to pick up in earnest.

The lows for the first half of the year came the Friday after the Superbowl in 2018. 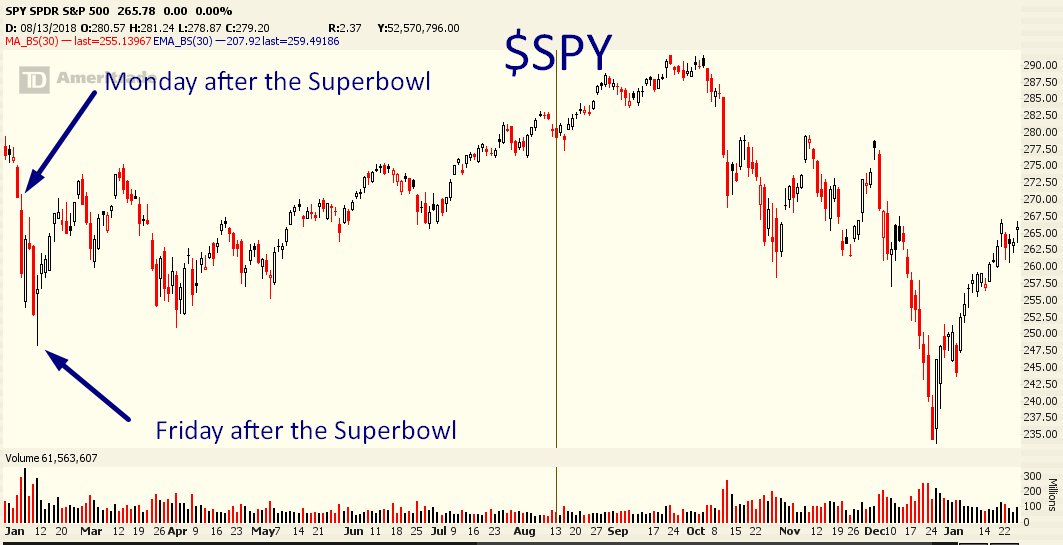 The VIX currently rests at the same levels it came into the day after Superbowl Plunge last year.

Do I think we will see a similar Superbowl swoon for stocks this time around?  No.

We headed into that Superbowl soon with the VIX just a few months away from historic lows under 9.  This time around we are heading into the Superbowl with very low expectations for growth and earnings.  The VIX is just a month removed from a 30+ reading.  Aside from those uber bears who call for market collapse every month, expectations weren't for a collapse early last year.  The action actually sobered up participants, with price action ending up higher many months down the road.

This time around the price action has been somewhat expected.  Central banks have been slowly pulling away the punch bowl, and earnings/growth expectations are low.

$CAT is out this morning confirming those views --->

and yet we saw last week other earnings reports coming out weak but getting a different type of price reaction... with $LRCX and $WDC soaring and  helping to fuel a sharp rally among their peers.

The $LRCX and $WDC conference calls gave no indication that a sharp turnaround was on the horizon, yet the price action told a different story.

We'll get a lot more clues this week as a host of big names are set to report, with $AAPL, in my opinion, the one that will matter the most.

$AAPL has falling almost $100 from its record highs of late last year.  The stock has seen an almost daily dose of negative headlines.  The price action, unlike many names,  has yet to meaningfully recover the losses from last year.    The pessimism surrounding $AAPL is as bad as I can remember it since the lows in May 2013.

Back then the growth story was over for AAPL according to almost every analyst.

At that time I thought not only was the story not over for AAPL,  it would rally to new all time record highs later that year!

The stock rallied some 4 fold from there becoming the most valuable company in the world.  From a split adjusted $54 to the recent $230+ record high.

I think all of the negative supplier news and the recent guidance cut is priced into the stock.  Obviously the price action after earnings will have the final say on that, but that is my opinion.  I like the odds of a rally back over $180 over the short term.

There are plenty other litmus tests out there this week for the market including Facebook and Amazon.  Both names are well off their record highs, with Facebook still seeing a lot of negative headlines and Amazon still slowly taking over the world.

Overall I think this market wants to head higher.  The Late 2018 swoon gave Central Banks a pause, which keep a lid on the rate hike cycle.

Momentum is to the upside, with momentum buy signals triggering for the first time since the lows at the start of 2016.