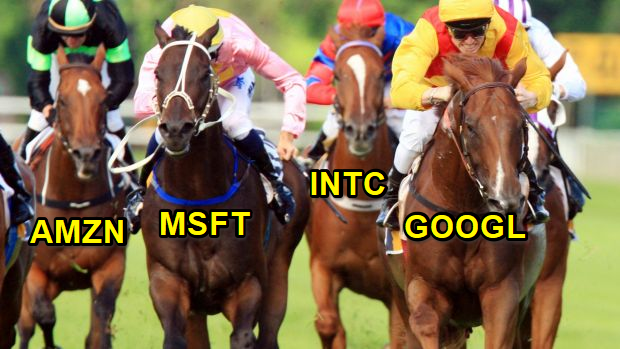 Just when you thought the Central Banks had mastered price perfection, the market goes out and  spikes prices even higher.  This morning tech is out to fresh all time highs, surpassing even the highs reached when John Q. Caveman cornered the round stone wheel market in 7,800 B.C.

It took nothing short of an impressive quadfecta to achieve this feet of price appreciation.

Last night   $MSFT, $AMZN, $GOOGL, $INTC all impressed investors.  This morning all four are sharply higher, lifting the $QQQ to record prices, and also giving a lift to their brothers and sisters.

The $QQQ, what some had dubbed the short of 2017, has rallied in impressive fashion in 2017.   The excuse for the uber bears had been prices for the $QQQ had already increased in prior years.

For those not learned in market terminology, prices rising on a consistent basis equals a trend.  And since the lows in 2009 the trend has been up.  Fighting it has been a tremendously impossible endevour.

$QQQ has been up every year since the financial crisis in 2008.

and each year we draw closer to that long awaited correction, which could come in 2018 or 2028.

Let's face it.  Heading into last nights quadfecta, tech wasn't exactly firing on all cylinders.  This market has done a great job keeping the bears involved.    Negativity has not gone away.

And now with another fresh new high, and tremendous earnings, the elusive successful top call remains.

Has the market finally topped?

Has The Market Finally Topped?

The answer remains the same.  However after the earnings euphoria dies down, I still think the market is setting up for a decent pull back into the start of November.

We had a nice pull back this time last year into the election.  And just like every other dip since the March 2009 lows, that pull back turned into another incredible buying opportunity.