This coming Wednesday, March 9 2018, it will market the 9 year anniversary of the financial crisis lows.  Some say the bull market that started that day is still going today.

Others will say that the bull market has already reset since the financial crisis rally  and is only 5+ years old.  Let's just say, and I've written about this many times, if you didn't sell everything and  hide your life savings under a mattress, like a widely followed pundit urged the country to do, today you are doing quite well.

Heading into 2018 the market was on cruise control.  Nary a red candle to be found each month.

At least until February 2018 came to town.  The relentless, methodical upside gave way to a nasty correction.  One that is still gripping the market today.

We know where the market has been.  And we know why.  Low interest rates has fueled a record setting debt binge as Central Banks are winning the battle against their arch nemesis deflation.

From March 9th 2009 until January 2018 the price action of the market has been spot on.  Whatever excuse you want to use for the stock market rally,  Central Banks, low interest rates, stock buybacks... at the end of the day the price action is all the matters.  And for 9 years the price trend has been up.

Even with the recent pull back,  the first pull back we've seen in over 14 months, the trend remains up.  The easy answer about where the market is headed tomorrow, next month, and next year is higher.  And for the last nine years its been the RIGHT answer.  Unabated record highs.  The market may see these violent corrections, especially after the relentless upside action we've seen.  But the market isn't trending lower because of a two week pull back.

Trade wars, volatility product failures, inflation, interest rates, Tariffs... the excuses are there yet again for the market to fall.  Financial media is at is again with relentless headlines.  It's like Greece all over again, but with trade wars. 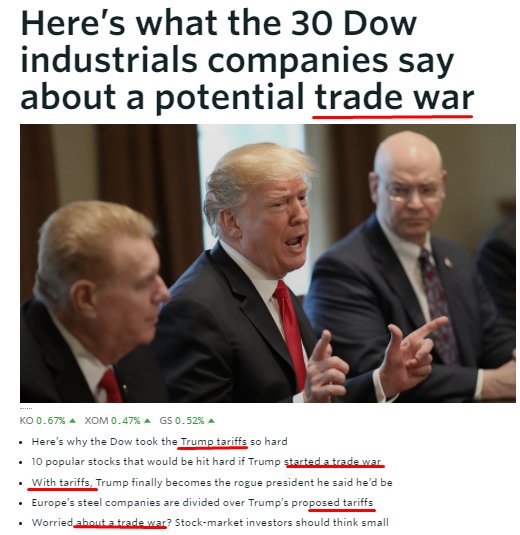 But if we've learned anything at all the last 9 years, its when all those excuses to sell pile up, it ends up being just another reason to buy.  We saw it late on Friday.  The market is back in recovery mode.

Will we be looking back at a higher low made this past week?  Or are we poised to retest the lows of last month?

I think one this is certain.  I'm leaning toward another move to fresh record highs over the short to medium term.  Not only has it been easy to be right saying "UP" the last 9 years, its also been the right call.  The trend remains "UP".  And until that changes the bias has to remain in that direction.

Have a great evening!