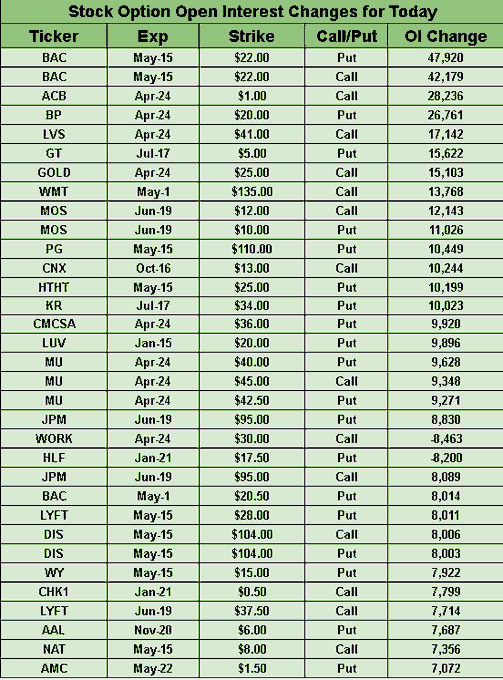 S&P 500 futures climbed 1.5% overnight, regaining some poise after two days of steep losses, as traders came to terms with the effects of this week's spectacular collapse in oil prices. Also boosting sentiment was a fresh $484B relief package for small businesses, hospitals and testing, while several Southern leaders across Georgia, South Carolina and Tennessee moved to reopen their local economies. In earnings news, keep on the lookout for reports from Delta (NYSE:DAL) and AT&T (NYSE:T), which will provide an outlook on the airline industry and another streaming service (HBO Max) looking to cash in during the COVID-19 pandemic.
Go deeper: CEOs across the globe see U-shaped recovery.

With all the news surrounding the WTI price crash over the last two days, it's finally Brent's turn to take a plunge. Prices on the sweet light crude tumbled as much as 17.3% overnight to $15.98/bbl, the lowest level since mid-1999. WTI is down another 6% to $10.87/bbl. The volatility in the oil market has also prompted CME Group (NASDAQ:CME), the world's biggest commodities exchange, to raise margins on crude futures and allow listing of negative options.
Go deeper: Interactive Brokers reports margin loss on crude oil contracts.

Traders are struggling to find enough ships, railcars, caverns and pipelines to store fuel as conventional storage facilities fill up. In fact, dozens of oil tankers have been booked in recent days to store at least 30M barrels, adding to the about 130M barrels of crude already in floating storage. As the crisis spirals, the Trump administration is reportedly considering offering federal stimulus to embattled oil-and-gas producers in exchange for government ownership stakes in the companies or their crude reserves.
Go deeper: Largest oil ETF restructures to stave off collapse.

Netflix is booming (for now?)

The streaming giant added a record 15.8M paid subscribers during the first quarter, smashing the 8.5M expected by Wall Street. While the stock rose over 3% AH on the news (it's up 34% YTD), it quickly erased gains after the executive reaction to the numbers. While cash flow isn't an issue (productions have shut down), Netflix (NASDAQ:NFLX) said there was heavy uncertainty surrounding the effects of COVID-19. As governments lift home confinement, it expects viewing and growth to decline.

Facebook (NASDAQ:FB) has revealed its largest investment ever, a $5.7B injection into Indian telecom Reliance Jio in return for a 9.99% stake. More records... It's the biggest investment for a minority tech stake in the world and the biggest foreign direct investment into Indian technology. Jio operates various broadband, mobile services and online commerce platforms, prompting speculation of a "super" app that could handle shopping, travel and payments or other collaborations.

There is a bright spotlight being thrown on where the funds from the original Paycheck Protection Program designed for small business went. The first-come, first-serve U.S. government aid program saw at least $243M of the total $349B funneled to publicly traded companies, including 15 with market caps of over $100M. As has been reported over the last week, the program ran dry before many mom-and-pop operations and smaller independent businesses were able to apply. Check out the list here.
Go deeper: Trump wants big companies to return PPP loans.

Trouble in the retail space is spiraling, with Macy's (NYSE:M) looking to avoid dire outcomes like bankruptcy, a trip it already took in the 1990s. According to CNBC, the retailer is seeking to use its inventory as collateral to raise $3B and real estate to raise an additional $1B-2B. Cowen analysts have estimated Macy's had only about four months of cash available, while its shares have fallen nearly 70% YTD.

General Motors (NYSE:GM) is closing down its Maven car-sharing business and has communicated the plans to the service's more than 230,000 users. The decision was partially due to the coronavirus pandemic, as well as the business itself, which was not thought to be profitable. The automaker announced the "personal mobility brand" in January 2016, marking its first significant foray into the car-sharing and mobility space.

"Some of these companies, I tell you, this is ethically very questionable to get out with this stuff," Roche (OTCQX:RHHBY) CEO Dr. Severin Schwan told reporters after scrutinizing some existing products. "It's a disaster. These tests are not worth anything, or have very little use," he added. Roche plans to offer its own blood tests by early May to identify those who had been infected with the coronavirus and plans by June to boost production to "high double-digit millions" per month.

"I think I should be hoping for more than just a pause in tensions, but really a serious rethinking of the very foundations of this important relationship," said Cui Tiankai, the Chinese ambassador to the U.S. Recently thawed tensions between the countries have resumed since COVID-19, with President Trump saying last weekend that Beijing should face consequences if it was "knowingly responsible" for the outbreak. The state of Missouri has also sued the Chinese government and other top institutions for the role they played in handling the pandemic.

United (NASDAQ:UAL) sells $1B of stock to weather pandemic.

JPMorgan (NYSE:JPM) to return employees to work in phases.

LendingClub (NYSE:LC) lays off a third of workforce.

ValueAct eyes Nintendo (OTCPK:NTDOY) with stake of over $1.1B.