Stocks started the day on weak footing as continued nervousness over China,  Russia,  Ukraine,  Crimea,  Unicornville,  The Rupublic of Neverworkbutlivelikeking,  and Hogloversland continued.   Don't go checking your atlas,  Unicornville is not a country.... at least not in this world,  nor is Hogloversland or The Republic of Neverworkbutlivelikeking.

My point is that you could call it anything you want,  each named reason to sell has been a great reason to buy.   That morning dip was bought hand over fist as stocks went from modestly red, to comforting green before lunch time.

The bullish/bearish sentiment on Stocktwits.com for our favorite EFT $SPY still shows a tremendous amount of bearishness. 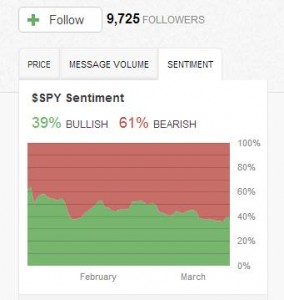 That has been a good thing for the bulls over the last year.   One of the more recent times we had readings of bullishness less than 40% and bearishness over 60% was last summer when $SPY was trading for a mere $164.   Do I think we see a $25 rip from here over the next 3-4 months?   I'm not so sure that is going to happen, but I do think the odds for continued upside remain.   Today's trading action was similar to what we've seen throughout the 5 year "bull" market we are in.   Every dip gets bought and just when you think stocks are going to take a dramatic fall,  they come back and trade to new record levels.

This morning at precisely the lows    (I am a perfect trader after all (my post here in case you missed it--->>>>>: https://www.optionmillionaires.com/perfect-trader/ )      I sold the LVS and WYNN puts I purchased on Monday and posted on my private twitter account and in the chat room. The drop down at the open on both stocks,  but namely $LVS was sharp and we know in this market just how quickly the dip buyers can emerge.

That was the good news.

My latest private tweet is for a $FB pull back, which did not come to fruition today.   I still hold those puts and will look by the open tomorrow as to take the loss or ride into the promise land.   The $LVS and $WYNN puts were not looking so good yesterday, with two days to go I'm not throwing in the towel just yet.

$CALL is up over 20% after hours on earnings.   A big shout out to JB who has stuck behind this stock this year.   His patience and perseverance are paying off in a big way.

$HLF took a tumble today after the FTC said it was investigating the company.   $HLF responded by saying they were "surprised" by this announcement.   Really?   They had no idea there was a chance of an FTC investigation?   Is management that naive?   I would have rather them say... we were expecting this and are prepared to let the truth speak for itself.   SURPRISED?

$Z up over 4%, record short interest in the name does not seem to be bothering the bulls.

The market is still chopping around,   I would love it to make up its mind. $190 or $182.5 on the $SPY.   I see short term support at $185, which is the next logical target assuming we continue in this downdraft and consolidation.   A move to $185 then $182.50 would set us up nicely for another move to all time highs.   will go over charts, earnings, trade's I am looking at tomorrow morning in my morning market video.

CNN is reporting they may have found the plane: http://www.cnn.com/2014/03/12/world/asia/malaysia-airlines-plane/index.html?hpt=hp_t1

Have a great night.