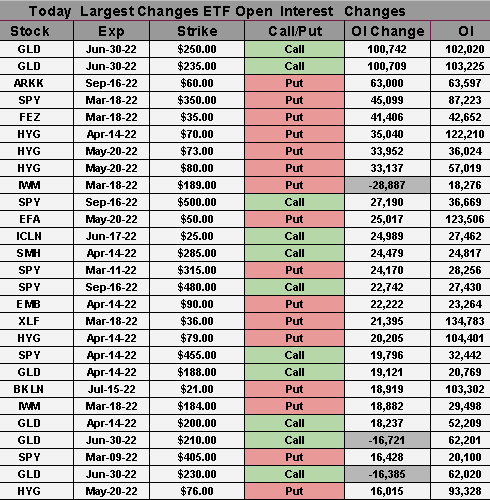 Fears of an economic downturn sent equities into a tailspin on Monday, triggering a steep selloff on Wall Street as commodities like oil, wheat and nickel powered higher. The S&P 500 plunged 3% for its worst day since October 2020, while the Dow Jones Industrial Average shed 800 points to join the S&P in correction territory for the first time in two years. The Nasdaq even ended the session in bear market territory, casting a dark shadow on March after all three indices fell in each of the previous two months.

Analyst commentary: "Not every recession has been caused by an oil price spike but every oil spike has caused a recession. This is likely to be a drawn-out affair and will have a sustained impact on commodity prices," said Brian O'Reilly, head of market strategy at Mediolanum International Funds. "Perhaps the scary part is that in 1990 [during the Gulf War], the Fed funds rate was 8% and eventually embarked on an easing cycle. Today, the Fed is at the beginning of a hiking cycle. It seems more and more likely a recession is unavoidable," added Ryan Grabinski, a strategist at Strategas Securities.

It's a big problem, with the Federal Reserve already stuck between a rock and a hard place in regards to monetary policy. Soaring commodities and red-hot inflation mean the central bank will need to accelerate its tightening, though doing so risks tipping the economy into a recession. On the other hand, taking more of an accommodative state and allowing inflation to rip higher would likely result in the same outcome.

Outlook: Stock futures slowed their descent overnight, hugging the flatline in premarket trade as the Kremlin said it would halt military operations "in a moment" if Kyiv met a list of conditions. Among them are ceasing military action, changing its constitution to enshrine neutrality (eliminate possibility of NATO, EU membership), recognizing separatist republics of Donetsk and Luhansk, and acknowledging Crimea as Russian territory. It's the most specific statement to date from Moscow on the terms it wants to impose on Ukraine, though a likely rejection by the government in Kyiv could lead to renewed market turmoil. (17 comments)

The clean energy debate, as well as industries of the future, has been getting a reality check in recent weeks as crude oil continues to power higher. It's not that the world won't eventually transition to cleaner fuels, but more about how long it will take to get there and securing ample energy supplies in the interim. Years of underinvestment in oil means Western nations are having a tough time ramping up supply, while the cuts to production are coming at a time of soaring fossil fuel demand.

Bigger picture: Oil producers are not likely to invest in further supply as they enjoy record high prices that provide their investors with big dividends. Moreover, corporate interests on Wall Street are looking to grow production only modestly due to ESG mandates, activist shareholder proposals and banks avoiding loans to the industry. CEOs of some of the world's largest oil companies even warned that there were no quick-fix solutions to higher energy prices at the CERAWeek conference in Houston, Texas. Check out some of the top headlines on Seeking Alpha:

The current environment is also roiling some market predictions that were made not long ago. "I would be surprised if oil hits $70 again," ARK Invest's (ARKK) Cathie Wood declared in May 2021, before doubling down on her forecast yesterday by saying crude prices were on their way back to $12. Even Tesla's (TSLA) Elon Musk tweeted this week, "Hate to say it, but we need to increase oil & gas output immediately. Extraordinary times demand extraordinary measures." YTD declines: ARKK -40%; TSLA -33% (note that Tesla is ARKK's biggest holding, making up over 8% of the fund).

Go deeper: The war in Ukraine has shown Germany's low-carbon energy transition is somewhat reliant on the kindness of Vladimir Putin, and even without restrictions on Russian energy, Germany is generating a majority of its electricity from coal. Amid heavy reliance on fossil fuels, energy prices in Europe have spiraled out of control, with European natural gas trading at ~$62/mmbtu, or translating into $360 oil on an energy equivalent basis. EU leaders will agree this week to phase out dependency on imports of Russian energy sources as Moscow threatens to shutter Nord Stream 1, while the U.K. is seeking self-sufficiency by increasing North Sea oil and gas production. (38 comments)

Bucking the big selloff on Monday, shares of Bed Bath & Beyond (BBBY) went into meme mode, closing the session up 34% (after a more than 76% gain in premarket trading). Billionaire Ryan Cohen disclosed a 9.8% stake in the company through his investment firm RC Ventures LLC, urging Bed Bath to explore alternatives, including a full sale or separating the "buybuy BABY" business. He also highlighted that after almost two and a half years into CEO Mark Tritton's tenure BBBY has underperformed the S&P Retail Select Index by about 58% on an absolute basis.

Flashback: Back in 2019, Bed Bath settled a months-long dispute with a group of activist investors, who slammed the company over its e-commerce presence compared to industry peers like Amazon (AMZN). It ended up adding four new members to its board, and brought on former Target executive Tritton to embark on a new direction. Since taking the helm, Tritton has closed or remodeled hundreds of underperforming Bed Bath stores, debuted new private labels, ramped up share buybacks and sold non-core assets like Cost Plus World Market and Christmas Tree Shops.

The latest saga is very similar to Cohen's move at original meme stock GameStop (GME). In late 2020, RC Ventures disclosed a nearly 10% stake in the videogame retailer, advocating for an improved e-commerce experience and other tech-driven opportunities. Cohen was added to the board that January - as the meme frenzy was taking off - and eventually rose to board chairman.

Response from Bed Bath: "The Board and management team maintain a consistent dialogue with our shareholders and, while we have had no prior contact with RC Ventures, we will carefully review their letter and hope to engage constructively around the ideas they have put forth. Our Board is committed to acting in the best interests of our shareholders and regularly reviews all paths to create shareholder value. 2021 marked the first year of execution of our bold, multi-year transformation plan, which we believe will create significant long-term shareholder value." (21 comments)

Apple (AAPL) shareholders and the tech industry will be tuning in at 10 a.m. PST to the company's first product unveiling of 2022. Apple is widely expected to unveil a new iPhone SE with 5G capabilities, as well as a new iPad Air and some Macs using its M-series of chips, all of which Wedbush Securities believes will add to the tech giant's "monster product cycle." The iPhone will reportedly feature a faster processor and a better camera, and may even come at a lower cost than the current $399 iPhone SE.

Analyst commentary: Wedbush's Dan Ives, who rates AAPL at outperform with a $200 price target, notes that Apple is bucking the trend of other tech and automotive firms who have held back production, even introducing fresh products in the wake of supply chain issues, which he believes speaks "to the nearly Teflon-like ability of [Tim] Cook & Co. to navigate this unprecedented supply chain shortage globally."

On the new iPhone SE, Ives maintains a "conservative" estimate of roughly 30M units sold over the next year due to global pent-up demand for the model based on recent supply chain checks. "For the low price point and new specs/speed with multiple storage capabilities (64GB, 128GB, and 256GB), we believe the value proposition for consumers is a 'standout' relative to competitors and could translate into some further Android share gains."

Other products: Ives notes that the iPad Air is likely to have the A15 chip and is also expecting a 13-inch MacBook Pro with an updated M2 chip and perhaps more Macs to come later in the year, like at Apple's developer conference in June. "Overall in this volatile geopolitical climate with a general risk-off preference among investors as the horrific and heartbreaking Ukraine invasion causes market jitters, we believe Apple is a safety tech name to own during this market storm," he adds, referencing Russia's invasion of Ukraine. (15 comments)

10% chance of a nuclear apocalypse in the next year - BCA Research.

Biden set to sign order on cryptocurrency strategy this week.