I noted on Monday before the bell that I felt $TLT puts would be a great trade this week. In my possible trade section I listed the $TLT $107 weekly puts at a price of $.30. They currently trade for over $2.00 with a high of $2.10 on the day. I did not enter this trade. Instead I entered the $106 puts at $.19. I posted such in the chat room and private twitter. At that stage those options dropped to $.16 x $.18 offering traders the chance to get in at an even cheaper price. Today those options hit a high of $1.24.

I think we could still in the early innings of a 9 inning game. The last ballgame we had at optionmillionaires starred the Goldfingers. The Market Pros smoked the Goldfingers in a massive route that saw $GLD and $GDX drop significantly creating massive profits. This time around the James Bonds are poised to get crushed by the Vigilantes.

The decline has been rather orderly recently for $TLT, and we've seen some rallies that have perhaps swayed the opinion of many. I'm not sure there is a consensus on were Bonds are heading short term, which is why I am confident that the next move lower is right upon us.

If I did not know what $TLT represented and just looked at it from a chart perspective, the chart looks very weak. It also is right at the breaking point. The move lower will be reminiscent of the drop $GLD and $SLV saw earlier this year. I see a rather quick decline to the $100 level coming. I don't think $TLT will find a bottom until it runs into multi-year support at $80. That move will take some time and there will be many sharp rallies along the way, but one thing is clear. Bonds are not the place to be anymore. You could also utilize $TMV the 3x 20 year bond bear to take advantage of this move, but just be aware the risks associated with the leveraged ETF's.

I still like October puts but may look for September puts. The $101 strike is at $.61. I will let you know in the chat room if I get them. Good luck. 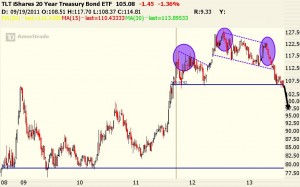