BofA Global Research released a 152-page research report identifying 14 “radical technologies that could change our lives and accelerate the impact of global megatrends.” The technologies have a $330B market size today that could grow to $6.4T by the 2030s, strategists led by Haim Israel say. “These moonshots could transform and disrupt multiple industries, contributing to the next big cycle of technology-driven growth.” Israel says. The 14 are:

500 (SP500) (NYSEARCA:SPY) incumbents is shortening and by 2027 components could last just 12 years before being replaced, BofA says. For Next Tech to succeed, first the innovation must have the potential to be economical, then it must solve a key problem or improve quality of life, and finally, there must be government support in some way. Risks to the 14 ideas include the tech not being commercially scalable, prohibitive costs outweighing the benefits and regulation limiting applicability. 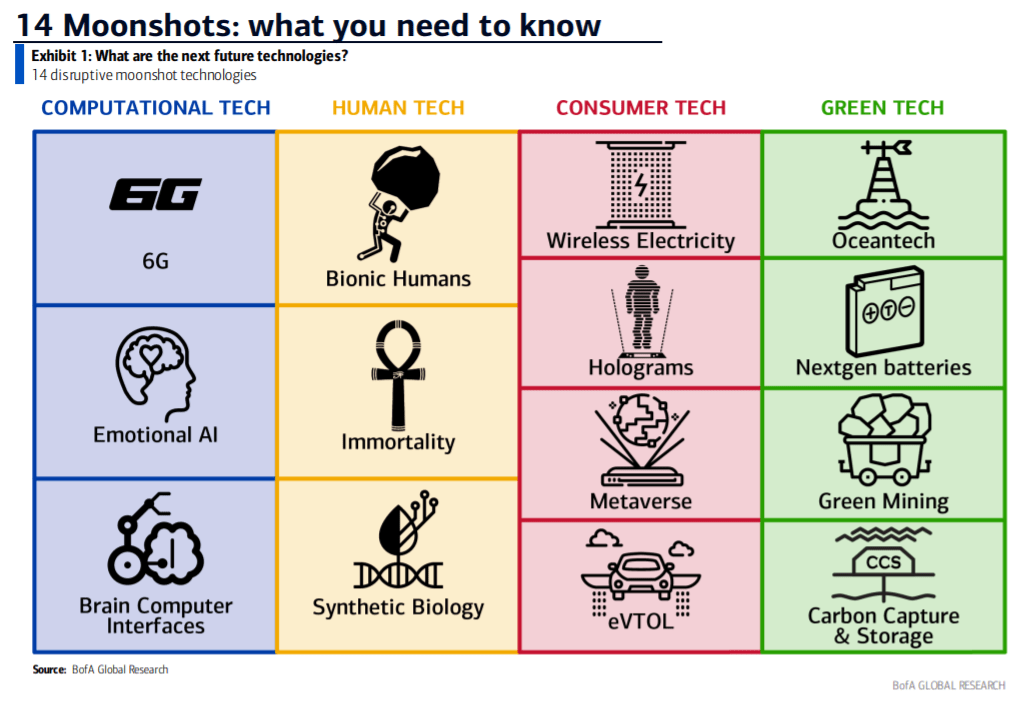 An electricity cable mishap has raised the real possibility of electricity blackouts in the U.K. if there are any more problems with the grid this winter. A major cable that supplied power from France has been shut down due to a Wednesday fire and will be offline until March.

GreenSky (NASDAQ:GSKY) shares shot up 50% after the online lender agreed to be acquired by Goldman Sachs (NYSE:GS) for $2.24B, in a transaction that bolsters the Wall Street bank's presence on Main Street. GreenSky stockholders will get 0.03 share of Goldman stock for each GSKY share they hold.

GreenSky works through retailers like Home Depot and independent doctors and dentists to arrange loans for such things as cosmetic surgery or construction products. It has a network of more than 10,000 merchants. The business will complement Goldman's Marcus consumer banking platform, positioning it for further growth, Goldman said. (5 comments)

Cisco Systems (NASDAQ:CSCO) said that it expects half of its sales will likely come from software and recurring revenue as it continues shifting into new areas beyond its long-time core networking products.

Scott Herron, the company's chief financial officer, gave an assessment of Cisco's business at a virtual meeting with Wall Street analysts on Wednesday.

Herron said an ongoing worldwide shortage in computing parts such as memory chips and power supply units will result in some pressure on the company's hardware profit margins. Still, Herron said Cisco sees that part of its business continues to grow. (1 comment)

The House Ways and Means Committee late this afternoon approved a portion of the Democrats' $3.5T spending package that includes a provision for prescription drug price negotiation by HHS, The Hill reports. The provision would also cap price increases on some drugs at the inflation rate. (43 comments)