Who is the fool here? Is it CNBC who has the headline "Earnings, Spanish auctions to sway wallstreet thursday", or is it retail trader Joe who actually believes the auction will have any impact on the market?? Let me get this out of the way first... I AM SORRY FOR CALLING YOU A FOOL. I hope you accept my apology. 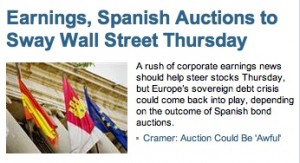 We have written about this scenario many times(you can read that here). So do as we did and ask yourself: "How will a poor Spanish Debt Auction effect the market?"

We started to ask that question, then thought, how could the auction not do well? The US market is up between 7-16% this year. Interest rates continue to remain low. Commodities have become clouded in manipulation and folks are still wary from the MF Global fiasco. Where are investors going to put their money to work that will actually give them a return on their investment?

Sovereign Debt from an established economy with high yields sounds like a great deal. Heck, that wouldn't take much of a sales pitch.

So why the concern? Is the Eurozone in trouble again? Better yet, when was it not in trouble? The Duct tape is still there, nothing has changed. First Greece, then Portugal, then Italy, now Spain.If not the Eurozone, then its the sudden realization that CHINA manufactured its growth over the past few years.Thats old news, but it gets pulled out of the hat when fear needs to come back into the market.

It's always going to be something, but the headline that makes me more confident of a rally Thursday and Friday, is Cramer's view on the Spanish auction... that it will be "awful".

We have done well in 2012 by ignoring the macro headlines, and focusing on our trades. We shall see what tomorrow brings, but dont be surprised when the Spanish Auction becomes nothing more then a dog and pony show.