After the market closes on Wednesday June 8th we will get an idea whether Restoration Hardware is in the early stages of stock price restoration, or setting up for a plunge to record lows.  This is a report I plan to trade this week.  Why?

For one I think the stock is going to make a move greater than what the market is expecting which is $2.60 or almost 8%.

I am biased for a move to the upside and will  hedge a CALL position with some puts.  I am not trading for the stock to trade less than 8% in either direction after its earnings report.

Here is the type of trade I am looking to make:

a 12%+ move lower would see the Call value head to nil and the puts double to $300, which would help offset some of the losing call position.

I will need $RH to at least trade over $36 to turn a profit.  The higher it goes the more profit the trade returns. 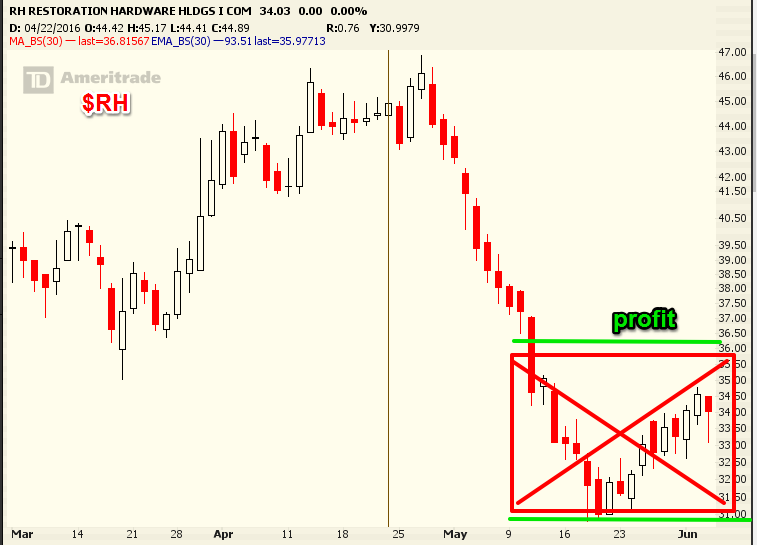 Restoration Hardware Holdings Inc. is expected* to report earnings on 06/08/2016 after market close. The report will be for the fiscal Quarter ending Apr 2016. According to Zacks Investment Research, based on 11 analysts' forecasts, the consensus EPS forecast for the quarter is $0.05. The reported EPS for the same quarter last year was $0.23.

For the current Fiscal Quarter, 19 analysts have given an Average earnings estimate of $0.05 per share. According to the Analysts, the Low Estimate Earnings of the current Quarter is $0.04 whereas, High Estimate is $0.06. The Previous Year EPS of this Quarter is $0.23.

Restoration Hardware Holdings, Inc. (NYSE:RH) currently has High Price Target of $75. The Low and Mean Price Targets are $30 and $51.13 respectively. These price targets are a consensus analysis of 16 brokers.

When having a look at Recommendation Trends of the stock polled by Thomson First call. For the Current month, 4 analysts have assigned this stock as Strong Buy where 5 assigned Buy, 10 analysts believe it’s a Hold, 0 said Underperform and 1 assigned Sell rating.

The high-end retail market has gone through some difficulties lately, and home furnishings specialist Restoration Hardware (NYSE:RH) has seen its stock take a big hit in response to tough industry conditions. As the company prepares to release its first-quarter results, Restoration Hardware investors aren't certain what to expect, but they're bracing for a big drop in earnings despite remaining hopeful that the company will see its sales rise from year-ago levels. Still, other retailers have had trouble this earnings season, and some fear that Restoration Hardware might not be able to overcome even the low hurdle it has before it. Let's take an early look at what we're likely to see from Restoration Hardware and what its future looks like.

In recent months, investors have gotten much less optimistic about Restoration Hardware earnings. They've marked down their fiscal first-quarter estimates by almost three-quarters, and they've reduced their full-year projections for the current and next fiscal years by more than 10% each. The stock has continued to languish, falling another 16% since late February.

Restoration Hardware's fiscal fourth-quarter results included a number of challenges that the retailer has faced. Revenue was up 11% from the year-ago quarter, but net income declined more than expected. The company said that production delays from its RH Modern suppliers prevented Restoration Hardware from delivering on all of its orders, and it also pointed to weakness in areas of the country that had previously provided substantial growth because of the long energy boom. Promotional activity that Restoration Hardware used to try to increase its revenue wasn't as successful as hoped, and the retailer cited the general negative environment for high-end retail as a contributing factor to its sluggish results. Negative guidance for the full fiscal year also gave investors pause about the company's longer-term prospects.

Yet one interesting response that Restoration Hardware has implemented takes a page from the warehouse retail business model. The new RH Grey Card aims to address the mixed success of the retailer's promotional strategy by offering a 25% discount to anyone willing to pay the $100 annual fee for the card. The move caters to the demand among shoppers for discounts, something that is even affecting the upper end of the retail industry. Nevertheless, as other retailers have discovered, implementing an alternative method for savings won't necessarily stop other shoppers from continuing to demand the promotions that they've grown used to seeing from Restoration Hardware in the past.

Still, one problem that Restoration Hardware faces is that its competitors aren't seeing all the same negative trends that it has experienced. General home-improvement retailers like Home Depot have continued to take full advantage of the booming housing market, finding ways to keep growing even as fears about rising interest rates have some wondering how long housing can help support the overall U.S. economy. Some of Restoration Hardware's higher-end peers haven't seen pullbacks to the same extent, either, even though the broader environment for non-furnishings retailers has been ugly across the industry.

In the Restoration Hardware report, shareholders need to see how well the company's strategic moves have panned out so far. It's early to expect substantial results from the RH Grey Card, but if the company's explanations for supplier delays were correct, then some of the pent-up order fulfillment should actually boost the retailer's numbers. If that doesn't happen, then investors will need to be even more cautious about Restoration Hardware going forward.

RH (NYSE:RH) today announced that it will report financial results for the first quarter ended April 30, 2016 on Wednesday, June 8, 2016 after market close. At that time, RH will post a video presentation highlighting the Company's continued evolution and recent performance on the RH Investor Relations website at ir.restorationhardware.com.

RH leadership will then host a live question and answer conference call and audio webcast at 2:30 p.m. Pacific Time (5:30 p.m. Eastern Time). The live question and answer conference call may be accessed by dialing (866) 394-6658 or (706) 679-9188. The call and replay can also be accessed via audio webcast at ir.restorationhardware.com.