At optionmillionaires.com, we pride ourselves on having a great chat room and community but we also have made some incredible trades over the years. The recent $NUS trade just about trumps them all.

I then explained my trade on the blog at optionmillionaires.com:

On twitter and stocktwits I told the world, in a not so subtle fashion,   that I thought the stock was going to collapse. Sure enough, it did. $NUS suffered an epic collapse this week. 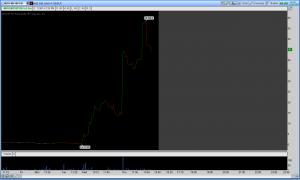 Successfully trading out of the money stock options is not an easy task. Anyone claiming 100%, 90%, 80% success rates is lying to you. We have a great track record of finding the options that are poised to make a big move before everyone else. Are 10,000% gains the norm at optionmillionaires.com? While I wish those gains were had everyday, those types of returns do not come often. However...JB just last week bought the $ISRG $390 calls at $.20 before it surged over $420. It's been a great start to 2014.

No one was talking about $NUS early this week and late last week. Now, everyone is talking about this stock. That is what members at optionmillionaires get, in addition to access to a great community of traders.