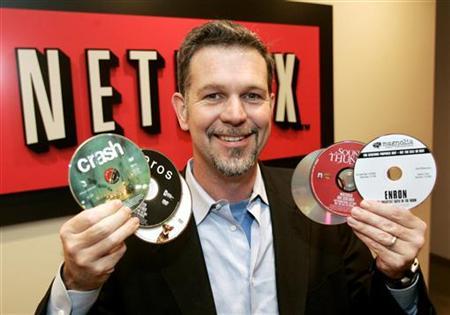 We have written about NetFlix (NFLX) quite a few times over the past year, and have shared our somewhat bullish outlook. This stock has had an epic fall from grace that all other growth stories will be compared to going forward. The question to ask is if the growth story is over or are we in Chapter 3 of a novel? Time will tell as this NetFlix story is filled with quite the drama and suspense.

On Tuesday CEO Reed Hastings posted this on his facebook page: 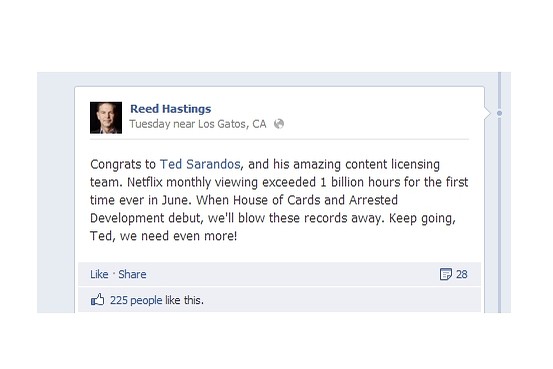 A quick boast about record viewing hours. Not really a 'material' event, so dont think there is a need for an 8-k as the genius's over at CNBC think it warrants. But it was enough to re-ignite the fire under a dying stock. The stock ripped $10 to close at $81.72. It was an amazingly strong rally with no substantial pull-back and huge volume. The one that you like to see if your banking on a multi-day run like we are. We thought NetFlix (NFLX) was on the verge of a rally in mid-june, and looks like we are finally getting it. Why?

Well with the huge subscriber base and international growth still on the horizon, we think NetFlix (NFLX) still has huge growth potential.

Lets do some quick math on the 1 billion viewing hours for June. Last reported numbers were for the 3 months ending with December of last year, when there were a total of 2 billion viewing hours. Thats a 33% increase in viewing hours in June from December. So are folks viewing habits changing so much, that they are watching 33% more programming on NetFlix(NFLX)?

So is NetFlix (NFLX) like a buffet and folks are just stuffing their faces with more macaroni and cheese? Thats what this "5 star rated" ANALyst thinks:

Wedbush analyst Michael Patcher said the increase in viewing time might just lead to an increase in content costs for the Los Gatos, California-based company.

"Netflix is an all you can eat buffet, and if the buffet sees its consumption go up by 50 percent and they don't raise price that is not a good thing," Patcher who has an "underperform" rating on the stock, said.

Yeah, this guy has been bearish on NetFlix (NFLX) and Bullish on Coinstar (CSTR) for sometime. A classic heads I win tails you lose scenario. He's all ready to throw a quick analogy to rationalize his gloom and doom prediction on NetFlix (NFLX). Sorry to hear that Michael, but you have it wrong this time just like your $44 price target on FaceBook (FB). Its not about consumption, but the quality of the consumption. You see cheap a cheap product, we see Lobster.

Your telling me subscribers are watching 33% more content then 6 months ago? I am sure there has been an increase in subscribers viewing hours...a result of smart phone and Ipads, but it's not 33%. June was warmer then average... you think folks sat on their ass to watch T.V. shows? Based on the subscriber numbers, each NetFlix (NFLX) streaming customer would need to watch 10 more hours of NetFlix (NFLX) content in June then in December to get the 33% increase needed for the 1 billion viewing hours.

To me it sounds like there were a heck of a lot of people signing up for service. But what do I know, I am not an ANALyst.

Volume tells the story on NetFlix(NFLX) and we think there will be at least 1-2 more green candles on the chart before any pullback, meaning $90+ sometime on or before Monday.