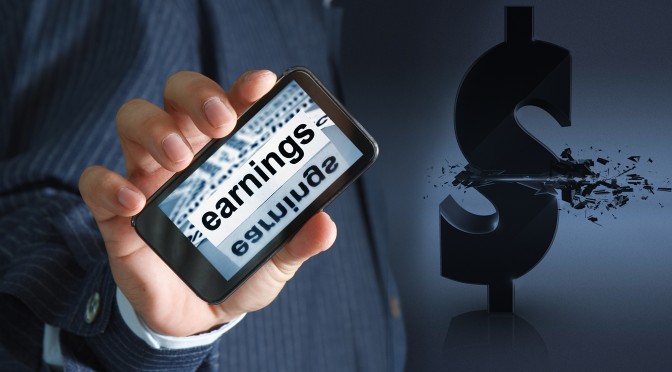 Earnings season heats up in a big way this coming week. One of the headliners this coming week it  Netflix.  Netflix saw its stock rally almost 20% after its previous  earnings report.  This time around the market is pricing in an almost 11% move:

(from Variety.com)  Netflix: Shares closed at an all-time high of $133.70 on Friday, up 3.5%, after Wall Street analysts issued upbeat forecasts for the company’s year-end 2016 quarter.

Netflix shares, which have a history of being relatively volatile, have been climbing fairly consistently since the stock was hammered last April after a weaker-than-expected subscriber forecast.

The stock’s jump comes after Deutsche Bank analyst Bryan Kraft raised his rating from “Sell” to “Hold” in a research note Thursday, saying he expects Netflix to beat guidance for international subscriber additions. Netflix is still overvalued, according to Kraft, but he noted that the “key driver of the stock price around earnings reports has predominantly been subscribers.” He expects Netflix to add 4.35 million international subs, compared with the company’s forecast of 3.35 million, with particular strength in Germany, France, Spain and Italy.

“Netflix navigated its way through the ’16 pricing increases relatively unscathed,” he wrote, which yielded higher revenue per subscriber in many markets.

Meanwhile, RBC Capital Markets analyst Mark Mahaney expects Netflix fourth-quarter 2016 results to be in line with consensus estimates, forecasting revenue of $2.47 billion and earnings per share of 13 cents. Netflix “has been the biggest (internet industry) stock outperformer over the last quarter, which we interpret as implying high expectations” for the first quarter of 2017, Mahaney wrote in a note published Thursday.

In the U.S., 54% of consumers now use Netflix to watch movies and TV shows, versus YouTube at 50% and Amazon at 29%, per RBC’s quarterly survey of about 1,000 American consumers. The survey also found high adoption among millennials: 67% of those aged 18–29 currently subscribe to Netflix, compared with 43% of 30 and older. According to RBC’s survey of 3,000 users in France and Germany, penetration in those countries is rising steadily: 18% of users in France and 17% in Germany now use Netflix, up from 5% and 4%, respectively, in December 2014. The survey also found an increase in the willingness to pay for streaming content among French and German consumers

The shares got an upgrade this morning, from Deutsche Bank’s Bryan Kraft, who raised the stock to Hold from Sell. Deutsche doesn’t provide its research to press, but a summary provided by TheFlyontheWall relates that Kraft the company will beat consensus next week with its net subscriber additions.

That topic of sub adds is always the main event for Netflix stock, and several other individuals today reflect on the matter.

For Q1, the Street is modeling 1.54 million, domestic, and 2.8 million, international.

Most analysts seem fairly positive on the subscriber outlook, the question is whether it’s enough for the stock to move this year, and on that score, there are differences of opinion:

Pacific Crest’s Andy Hargreaves reiterates an Overweight rating on the shares, and a $135 price target, writing that things look good for Q4 and Q1’s outlook:

Despite that, Hargreaves opines that “an acquisition or broader strategic vision may be necessary to drive the next leg of material stock appreciation, neither of which have high certainty,” given that subscriber gains may not lead to much stock upside:

We continue to recommend owning NFLX. The company operates what we view as the ideal model for premium video distribution in the Internet era, which offers a tremendous opportunity for further revenue and profit growth. However, at current levels and with the company’s strategy well outlined, the opportunity for subscriber or pricing growth beyond our expectations is more balanced with the risk of slowing growth due to competition or other factors. Consequently, absent an acquisition, we believe the company may have to expand its strategic vision to support more than moderate annual stock appreciate. We believe the company has the asset base and ambition to do this, either by expanding into ad-supported video, broadening subscription options to leverage elasticity, or pursuing tangential opportunities. However, timing and impact of such a move is highly uncertain. Separately, we continue to believe Netflix is a viable acquisition target for both technology companies looking to expand their video services business, or traditional media companies looking to transition toward direct- to-consumer distribution. Although its $55 billion market cap has become more of a challenge for many businesses to consider, Netflix remains entirely unique in its positioning and a superior alternative to building out a global video distribution business from scratch, in our view.

Another bull, MKM Partners’s Rob Sanderson, reiterates a Buy rating and a $165 price target, writing that the big event next week will probably be the company bearing Q1 expectations with its forecast.

Sanderson is modeling the company to meet its own forecast for Q4. For Q1, though, he models 1.9 million domestic additions and 2.8 million international additions, above consensus.

He explains his reasoning:

Consensus does not reflect normal Q1 seasonality for net paid additions. Last quarter, management proactively highlighted a high bar for international net adds in Q1. We think the Street may have lowered too much. Last year was unusual on the ROW launch, but in the trailing three years, int’l net paid adds increased by 6% to 24% sequentially in Q1. Consensus is 30% lower in Q1 than in Q4. In the previous four years, domestic net adds have been up 46% to 74% sequentially in Q1. Consensus is up 18% this year. This is based on FactSet, which is historically not as accurate as other sources for subscribers. We expect to see StreetAccount consensus on Tuesday. We expect this data will still imply conservative Q1 expectations, though somewhat less conservative than FactSet.

In contrast to Hargreaves, Sanderson is upbeat about the stock outlook this year:

We think the stock set-up heading into 2017 is much better than a year ago. Comps should get easier through the year, originals are becoming a larger subscriber draw, the content slate is significantly larger for 2017 and a large portion of the footprint is entering what has been the break-out year for other regions.

From the bear side, Dougherty & Co.’s Steven Frankel reiterates a Neutral rating, as he sees Q4’s numbers in-line with consensus, but he’s more cautious about the rest of the year.

The stock, moreover, is so expensive that “the company must continue to execute to perfection, especially in terms of sub adds.”

Because of that, “while we like the company’s strategy and competitive position,” writes Frankel, “fear of quarter-to-quarter volatility and uncertainty as to when the company can see meaningful margin expansion — driving operating margins at least into the mid-teens — keeps us on the sidelines.”

Another bear weighing in today is FBR & Co.’s Barton Crockett, with a Market Perform rating, who thinks there is a “nice backdrop” for the Q4 report.

Crockett has been tracking Google searches for Netflix, and finds the trend suggests rising overseas interest, which is good as far as the company meeting Q4 expectations:

Google search volumes slightly better in 4Q16 versus 3Q16. As a rough gauge of global interest in Netflix, we track Google searches using Netflix as a search term across key territories (see detail in the note). The key takeaway is that in most territories the trend in searching for Netflix in 4Q16 was in line with or better than 3Q16. To us, this suggests a backdrop of steady to improving global consumer interest, a good backdrop for Netflix’s ability to execute versus guidance for 4Q16.

But Q1 is looking at a tough comparison, year over year, on subs, he believes:

In the U.S., Netflix churn rose in 2Q16 on fallout from the press coverage of an effective price hike from ungrandfathering. But, by our math, the impact of a 20-bp improvement in churn year over year would be totally offset by the increased churn from having a sub base that is 4 million larger. Netflix also reasonably called out 1Q16 as a difficult comp because of the rest of world launch in January 2016. International net adds grew 73% in 1Q16 to 4.5 million. We are modeling 3.7 million net international adds in 1Q17, a decline of 17%—a tough nut to overcome for the balance of the year when international growth should normalize.

Moreover, he thinks bulls are too easygoing about challenges:

But the equity, up 30% in the last three months (versus the S&P 500 up 6%), already anticipates much of this, and we believe bulls are too blithely eager to argue for accelerating sub growth in 2017, versus tough comps, and a little too quick to dismiss risks tied to potential change in the regulatory landscape under President- elect Trump.

Netflix Inc. is scheduled to report its fourth-quarter earnings results after the market closes on Wednesday.

Here's what investors can expect:

Earnings: Netflix (NFLX) is expected to report earnings of 13 cents per share, according to analysts surveyed by FactSet. That would be a 30% bump compared with last year's fourth quarter and an 8% increase from its most recent third-quarter per-share earnings. Netflix has beaten FactSet's earnings consensus in eight of the past 10 quarters.

Estimize, which crowdsources estimates from sell-side and buy-side analysts, hedge-fund managers, executives, academics and others, expects Netflix to report per-share earnings of 15 cents.

Revenue: Revenue for the quarter is expected to hit $2.47 billion, up more than 35% compared with the same period a year ago, according to analysts tracked by FactSet. That breaks down to an expected $1.39 billion in revenue from domestic streaming subscriptions, $942 million in international streaming revenue and $126 million from Netflix's DVD shipping business. The streaming giant has posted revenue below FactSet expectations in five of the last 10 quarters.

Don't miss:Apple sets its sights on Hollywood with plans for original content (http://www.marketwatch.com/story/apple-sets-its-sights-on-hollywood-with-plans-for-original-content-2017-01-12-71032927)

Share price: Analysts covering the stock have an average 12-month price target of $125.97, about 2.4% below current trading levels. The analysts, on average, rate Netflix stock overweight, according to FactSet.

Other issues: For Netflix, the focus has always been on its subscriber growth. The tech company turned media company has adamantly refused to implement an advertising model and instead increased subscription prices, which had an adverse impact on growth (http://www.marketwatch.com/story/netflix-price-increases-causing-subscribers-to-sign-off-2016-07-18).

As a means to increase its subscriber base, Netflix launched its service worldwide at the onset of 2016. Growth in new overseas markets has been slower than expected, according to J.P. Morgan analysts led by Doug Anmuth. To increase growth and appeal to a wider audience, Netflix has burned through cash to increase its original content selection, including more location-based shows and films, as well as the languages that accompany them.

Recently, Netflix has been faced with concerns around Amazon.com Inc.'s (AMZN) global content push (http://www.marketwatch.com/story/amazon-is-preparing-to-expand-streaming-video-to-200-countries-globally-wsj-2016-11-17) and what the future of net neutrality might be under the new administration.

"However, we believe Netflix sets up as a cleaner story into 2017 with pricing changes behind, revenue accretion from higher [average selling prices], stronger content and increased global profitability," Anmuth wrote his note to clients. "Importantly, we think Netflix can add more U.S. and international subscribers in 2017 than 2016."