When stock futures opened Sunday night they were deep in the red.   When investors awoke this morning a massive reversal was underway with S&P500 futures up some .8%.  Those gains were built upon as the trading session progressed.  The Greek gap down of weeks ago was filled, leaving behind last weeks strong support.

For many this move higher was unexpected.  But the drama has unfolded thus far mostly as I expected it to, and as it has throughout this historic bull market... with higher prices.

From late last weeks update I put my perspective in a nutshell. A good ole case of Greebola:

Look at the Greek gap from a few weeks ago.  Also notice the range bound market of 2015.  It's been a tough slog, but one that I think will ultimately land the market at fresh record highs.

It's easy to look in the mirror on the market.  To forecast the weather after its occurred.  Hey it rained yesterday.  Wow that was some thunderstorm.  It's another to see the market moves before they occur.  The great part about this bull market is that the moves have been choreographed by the World's central banks.  We know when the spins, leaps, and twists are likely to come.  Do you really think the stock market is going to crumble to pieces now?  Look no further than China.  The government will do anything it can to avert a systemic collapse of the stock market.

Couple government support with the still artificially low rate environment.  The continued stock buybacks.  The mergers.  The acquisitions.  It remains a stock market that is going higher, not lower and don't be surprised if we get a sharp spike through new highs and into uncharted territory.

The earnings bar has been set low, yet again.  With less shares to report earnings per share against, expect the big buy back corporations to blow away expectations.  I'll be covering a few that I think will do just that later this week.  Stay tuned for that.

$NFLX $INTC $JPM are reporting this week among a host of others.

$INTC my goodness.  The chart looks even more ominous than when I previously highlighted its ominousity.  The $33 July puts I highlighted in May at $.71 soared over $4 last week.  If this head and shoulders pattern works out, they could be over $7 before weeks end.  Not bad... not bad at all. 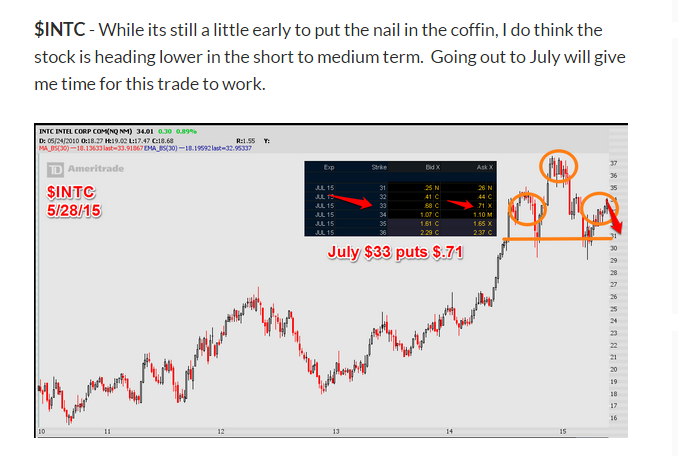 We have supported moves in many names this week.  $BIDU $WYNN $GOOGL all blasted higher today.

$GOOGL?  Has the $550 tractor beam finally broke?  The follow through is key tomorrow.  The previous early week over $562 for $GOOGL ended with the stock heading to $540.

How about that $LNKD - Is it ready for a breakout?

The more I look at this chart the more I think a swift spike over $200 is coming.

and with that I BID U a good evening.  Perhaps tomorrow the headlines will change from Greece and Chine aka #Cheek and to earnings season.  That would be a nice change of scenery.